In 1972, Mason Skiles (Jon Hamm) is an American diplomat assigned to beautiful, peaceful Beirut, Lebanon, when tragedy strikes. Ten years later, he’s called back up to assist in a high-stakes hostage negotiation with a highly nuanced political situation and difficult emotional stakes.

In 1972, Mason Skiles (Jon Hamm) is an American diplomat assigned to beautiful, peaceful Beirut, Lebanon, when tragedy strikes. Ten years later, he’s called back up to assist in a high-stakes hostage negotiation with a highly nuanced political situation and difficult emotional stakes.

There really are two characters in this Beirut: Jon Hamm’s Mason Skiles, and the city of Beirut. Both were once on top, the envy of others. In 1972, Skiles had a cushy diplomatic job where he could attend parties, drink a lot, and schmooze with beautiful and important people. Beirut, similarly, was once a paradise – the Paris of the Middle East. You could “Ski in the morning, swim in the afternoon, and party all evening long.” But the following ten years were kind to neither Skiles nor Beirut. When we meet both of them at the turn of the 1980s, they are bombed-out, smoking shells of what they once were, their glory days long gone.

Suddenly, an Islamic terrorist group has asked for Skiles to come back and arbitrate, and he is pulled out of retirement and back into the thick of things. He’s met by an eager operative named Sandy Crowder (Rosamund Pike) who tells him his former partner and best friend has been taken by the group, and that Skiles is really just in Beirut to stall for time while they locate Cal (Mark Pellegrino) and retake him by force.

The problems come when Skiles begins to put his negotiating skills to the test. All the other agents just see Beirut as another chaotic Middle Eastern country–which is true on the surface. However, Beirut has been divided by the Palestinians, the Christians, and the Lebanese, with Israel and America essentially fighting proxy wars with Arafat and myriad other groups. Skiles realizes that delivering the goods to the terrorists is not going to be as black and white as the US State Department believes.

I was actually a bit worried they’d try to make Don Draper into Jason Bourne, particularly because Bourne writer Tony Gilroy is involved. Unfortunately, Jon Hamm is not our new James Bond or Jason Bourne. It’s not really a spy thriller, per se. There aren’t epic, close-quarters fight scenes or Black Hawk Down-style prolonged gunfights. Instead, the film plays directly into Hamm’s strength: his charisma. We see pretty quickly into the hostage situation that Mason Skiles is a great negotiator, reading whatever room he’s in and assessing the situation. His words and intelligence wins the day. 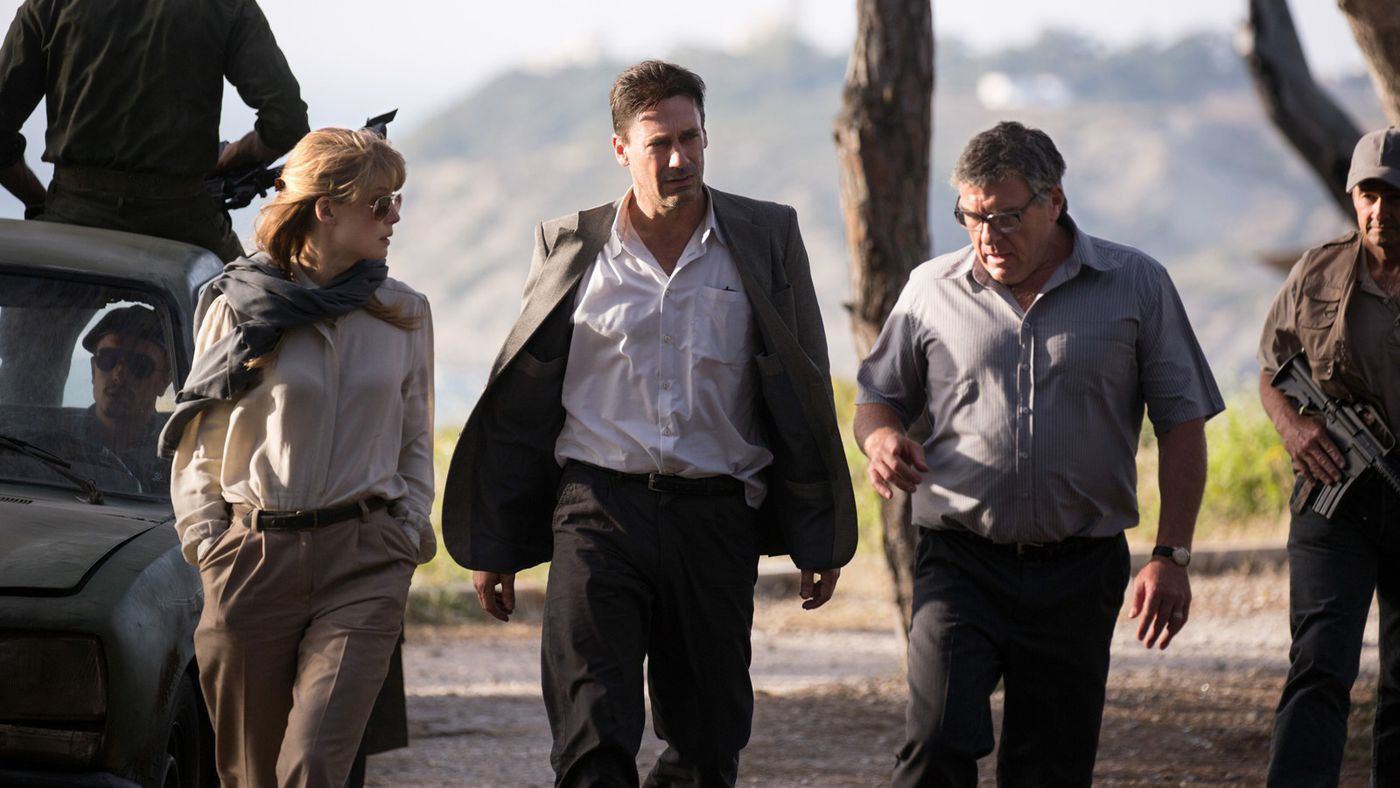 As for the supporting cast, Rosamund Pike is just a consistently, intensely amazing actress. It doesn’t matter what she does, she can sell the truth of any scene. It won’t be long before she earns herself an Oscar (she was nominated for Gone Girl, which is amazing, if you haven’t seen it, and she’s already put forth a stellar effort this year in Hostiles). The others don’t really get much to do here.

A few complaints: at the beginning of the film, I was seriously distracted by the poorly done de-aging CG of Jon Hamm’s face. It’s a crime to do that to such a handsome man. The secondary characters were poorly fleshed out. I appreciated the attempt to humanize Karim, the boy that Skiles takes in and whom he encounters later, but more could have been done on that front. And finally, a terribly, terribly written final scene leaves a bad taste in my mouth of a rather well-composed film. It felt jammed in to give some ham-fisted closure at the end of the film.

As I said before, there really are two characters in this film: Skiles and Beirut. The city is shown in all its glory at the beginning, and the tragedy of what it has become is all too apparent when Skiles returns. This is actually important: too often in films we’ve just seen another nameless, faceless, shelled-out, smoking-cratered Middle Eastern city with people running about shooting AK-47s. This film highlights the tragedy of Beirut. It was beautiful and cosmopolitan. People flocked to it. And then the people flocking to it began to tear it apart, and over 50,000 people died because of that conflict. I wish the film dwelled more upon this – and that more films would follow suit – but I appreciate its attempt.