Suits Season 8, Episode 4, “Revenue Per Square Foot” shows Robert Zane trying to get a tighter grip on the firm, but all the dramatics make it feel a little desperate.

Suits Season 8, Episode 4, “Revenue Per Square Foot” shows Robert Zane trying to get a tighter grip on the firm, but all the dramatics make it feel a little desperate.


This recap of Suits Season 8, Episode 4, “Revenue Per Square Foot”, will contain spoilers.

What happened to Louis Litt in Suits season 8, episode 4, “Revenue Per Square Foot”, was the last thing the character needed. The episode opens up with Louis getting mugged, after seasons of the character needing to build his confidence. It was an odd moment for Suits, which usually does not resort to real danger. The last physical violence I witnessed on Suits is when Harvey punched Louis. Oh, what a great moment that was…

Robert Zane is that annoying, insufferable micro-manager in “Revenue Per Square Foot”, and the victim again is poor shaken Louis, who refuses to explain what happened to his peers, meaning his flippant and odd behaviour is at the detriment to the firm. Robert decides to strip a client off Louis’s contract list, which only adds to the trauma when he tries to make up for it by working with Samantha. It has been a while since Louis has been the core of the story. Usually, he is at the butt end of a sex joke or speaking to his therapist but episode 4 manages to make us feel sorry for him. This is a great achievement because, usually, Louis causes his own downfall.

The next victim of Robert’s newfound teeth is Alex, who has caught on that he may not be the next partner. Ironically, by trying to impress Robert, he has gotten himself even lower in the ranks. Suits sells the story as though Alex is a hotshot lawyer, but strangely enough, he always appears to benefit off other people’s actions. In “Revenue Per Square Foot”, he ends up in a no-win situation with a potentially huge client due to the internal squabbling between Harvey and Robert. Alex gets the client and earns a little more respect from Harvey. But I do not think he earned more respect from the viewers. 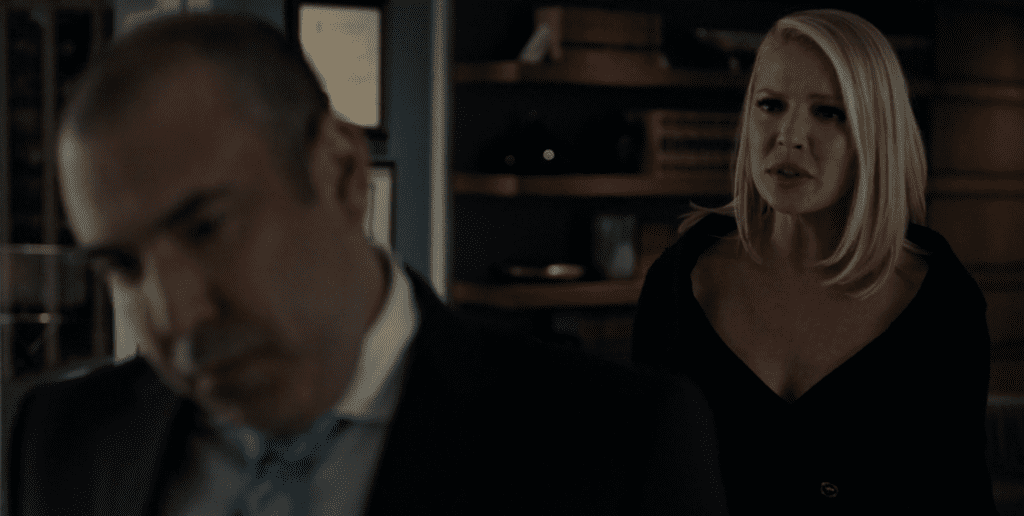 The issue that Robert has is how the firm is run. Since the inception of the series, the firm has moved in a certain way, with the characters giving that family feel even when situations turn sour. I almost got the feeling in “Revenue Per Square Foot” that Robert wanted to rid that ethos and create an atmosphere where people just work, with no play. Whilst I understand the need to change the show into a new direction, this felt nonsensical to me. Robert resorted to shouting at everyone, just to prove a point that the firm is different. We knew Suits had changed three episodes ago, calm down.

Suits season 8, episode 4 ended in higher spirits, with everyone supporting Louis’s traumatic moment and making sure that he is okay. The most telling part of this friendlier part of the episode is Samantha recognising that Harvey is Louis’s close friend, which resulted in a bonding moment where Harvey got the mugging story out of him. It almost felt like the earlier days, where Louis and Harvey loved and hated each other equally. There is no love lost between these two.

Donna finally got her words in without Robert cutting her off at the end; she explained the logic behind treating his firm well, which is obvious. Treat those how you would expect them to treat you and you will keep increasing that revenue per square foot. It was almost a Richard Branson speech. Suits season 8, episode 4 was odd with the violent dramatics, but overall it showed direction, even if it was a little laid on with the constant shouting of Robert Zane. Please, stop that.