Suits Season 8, Episode 5, “Good Mudding”, dealt with family issues, with the characters having to deal with personal problems, in an emotionally effective episode.

Suits Season 8, Episode 5, “Good Mudding”, dealt with family issues, with the characters having to deal with personal problems, in an emotionally effective episode.

It crossed my mind immediately as soon as the episode opened up – the writers for Suits flagrantly enjoy poking a character until they are down. Will they ever leave Louis Litt alone? Episode 5, “Good Mudding”, questioned Louis’ fertility and whilst it served the comedy aspect, for once I just wanted the TV series to leave the guy alone. Last episode, this hotshot lawyer was reduced to a child as he was held at gunpoint – now if you remember, Louis has always dreamt of having children, which has tarnished most of his adult relationships. I honestly believed the character was near breaking point when he found out that he may not be able to fully fulfil the needs required to create life.

Jerking off at a facility clinic was not the only activity Louis had to overcome. The writers decided to piece together this idea that Louis is, in fact, fertile, however, he has to give up his glorious stress reduction mud baths in order to increase the chances of pregnancy. These mud baths have been the cornerstone of Louis’ character. Those dreamy, clean, human-consuming mud baths have always been a running joke. Now it really is a plot-specific problem, with the title pun to go with it. “Good Mudding” is a grand episode in all honesty, showing the emotional sides of the characters.

Episode 5 of Season 8 really honed in on the family aspect of Suits, not the “business family” feel; Louis has family planning issues, Alex is struggling to mentor his teenage daughter but more importantly, Harvey got a call from his brother. If you cast your mind back to the last two seasons, Harvey has always felt a little resentful towards his family’s past due to a breakdown in marriage between his parents which turned ugly and created a toxic atmosphere amongst his loved ones. In “Good Mudding”, his brother asks Harvey for legal representation in a surprise divorce case with his soon to be ex-wife. This brings back the sore points that Harvey suffers from. 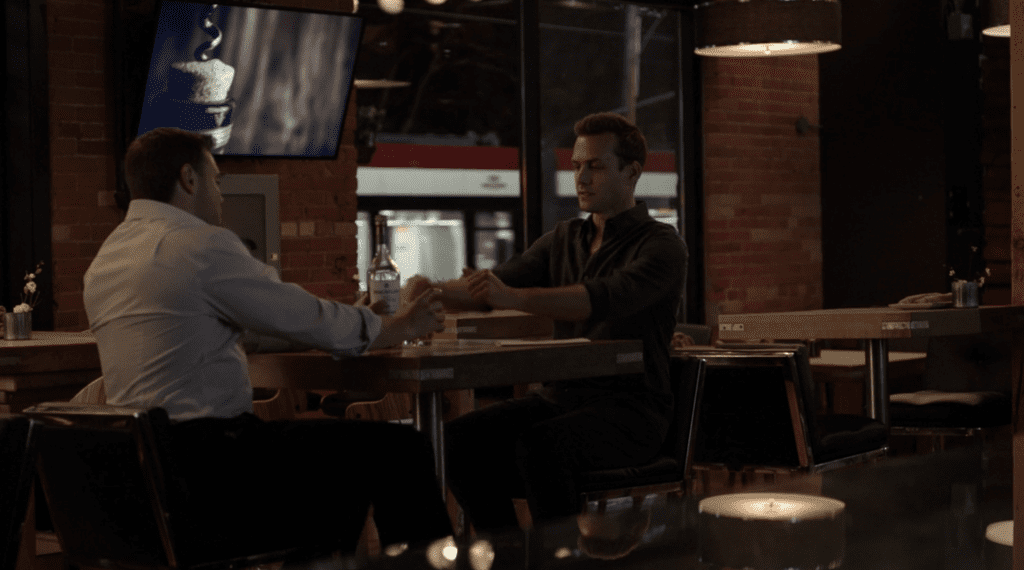 As much as Harvey bolsters around offices in his flashy suits and his demanding body language, deep down the corporate lawyer is all about loyalty, even when it comes to family asking for help. For Harvey, helping his brother in a divorce case feels morally wrong, especially because he knows his sibling is the one in the wrong. In “Good Mudding” Harvey clearly struggles to separate professionalism from family and loses his mind when he finds out the reason for the divorce; his brother initially claimed it to be adultery, when in fact it was gambling. Suits works much better when Harvey is emotional as it shows depth to the lead character. Witnessing Harvey solve family issues kind of made me wish that the series does this type of scenario on a more regular basis. Despite the emotional pressure, as usual, Harvey pushes the divorce case over the line – it’s his job to close cases.

Of course, Suits could not help but get Donna involved. Every time Harvey is a having some kind of life crisis, she comes to the fold and understands him for who he is. As I’ve previously discussed in other recaps, I do feel like Donna is getting pushed too much to the side; either the show is slowly making her less important so they can conveniently provide her with an exit to the story, or they are preparing to land a pivotal moment that will shock us all. I hope it is not the former, because the scenes between her and Harvey are the most effective element of the series.

Suits Season 8, Episode 5, “Good Mudding”, is the most filler episode so far this season, apart from Louis’ fertility issues; however, it was a well-measured filler episode, providing enough emotion for the loyal viewers to enjoy.