‘Yellowstone’ Episode 7 – “A Monster Is Among Us” | TV Recap

Yellowstone continues to be one of the weirdest shows on television with “A Monster Is Among Us”, but the bones of a truly great show are still in here.

Yellowstone continues to be one of the weirdest shows on television with “A Monster Is Among Us”, but the bones of a truly great show are still in here.

The seventh episode of Paramount’s Yellowstone is titled “A Monster Is Among Us”, and since watching it I’ve been wondering which of the show’s many monsters is might be referring to. It could be the bear. After making an impromptu cameo in last week’s episode, the roaming animal essentially became a credited cast member in “A Monster Is Among Us”. The hour opened with John Dutton (Kevin Costner) getting annoyed at a busload of foreign sightseers for gawping at it.

I should remind you that the bears are encroaching on Dutton land because John blew up a mountain in order to divert a water source away from his business rival’s holdings; he’s not lying when he growls at the tourists, “This is America. We don’t share land here.” Rip (Cole Hauser) is slightly more amenable to the tourists when he encounters a couple of them later in the episode, dangling from a cliff, but he’s got even less tolerance for the bear. After a disastrous rescue attempt which results in both of the visitors splattering to their deaths, the bear charges at Rip and he’s forced to shoot it dead.

This scene, in true Taylor Sheridan fashion, comes out of nowhere, adds very little, and means absolutely nothing. It’s just a random bout of tension and violence to exhilarate what is otherwise a rather low-key episode, and it would have been the first thing on the floor of the editing bay were Yellowstone a less creator-driven show. Still, here we are.

The monster might be Jamie Dutton (Wes Bentley), currently running for Attorney General, who admitted to his googly-eyed campaign manager that his political goals aren’t idealistic or altruistic; he just wants to consolidate power and protect his family. That this turned her on is probably a testament to how poorly Sheridan tends to write women, which is a whole other kind of beast in “A Monster Is Among Us”. 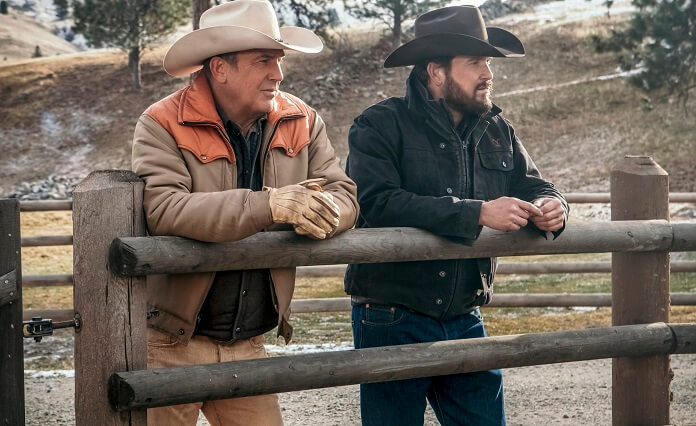 That brings us to Monica (Kelsey Asbille), who is alive after she collapsed last week, but still displaying worrying symptoms of permanent damage from the head trauma. Is the monster the troubled school kid who laid her out? Is it her son, Tate (Brecken Merrill), who assaults a hospital nurse and continues to be dangerously unruly? It could be either – or both.

Is it Beth (Kelly Reilly)? We were treated to another flashback of her childhood in “A Monster Is Among Us”, this one to the Christmas when she got her first period, and her mother subsequently terrified her with a lecture about being a woman now. I don’t know if we strictly need a psychological evaluation of Beth. It’s obvious from her colourful use of language, her promiscuity and her relentlessly self-destructive behaviour that she has some issues. She’s a better character when Sheridan allows her to actually do things, such as this week when she enjoyed a testy, vaguely flirtatious horse riding lesson with the new ranch hand, Walker (Ryan Bingham).

The monster could be Dan Jenkins (Danny Huston), the smarmy developer who has teamed up with Thomas Rainwater (Gil Birmingham) to finagle Dutton’s land from beneath him. It could be either of them, actually. Thomas said explicitly in “A Monster Is Among Us” that what he wants from the real-estate coup is “everything John Dutton has.” This episode didn’t spare much time for their scheming beyond a brief scene of contract haggling, and a clever legal flourish that allows Dutton to be tried for a felony because the river he diverted contained a food source for the local bear population. I wish Yellowstone had more stuff like that, but alas.

The likeliest monster is the “undignified” cancer that is causing John excruciating pain and to vomit blood. You have to wonder, now that Yellowstone has already been renewed by the Paramount Network for a second season, just how the show would function without Costner’s gruff patriarch. He’s looking worse for wear, to put it mildly. But I worry about his absence. In “A Monster Among Us”, he addressed the attendees of a cattlemen’s association dinner about the humble ranching profession, praying for rain and luck, despite the fact he’s one of the wealthiest men in the state. John Dutton embodies every irony in Sheridan’s neo-Western; all the entitlement and arrogance in the battle for land and power. It wouldn’t be the same with him gone. Maybe we should worry less about the monsters and more about what Yellowstone would do without them.