“Motion to Delay” offered an episode that provided some continuation to a previous story, but the cloud still hangs over Suits. It’s not what it used to be.

“Motion to Delay” offered an episode that provided some continuation to a previous story, but the cloud still hangs over Suits. It’s not what it used to be.

“Motion to Delay” was much better in the grand scheme of things. Episode 9 at least showed a continuation of some form, making me wonder why Suits have written such a choppy season so far. But this was okay, there was something to care about. I liked it, kind of.

Apologies for my pessimism, but I think for the first time my heart is not in Suits. All the way back in Season 1, I admired Suits for tickling my imagination in the world of corporate law. I miss the secrecy of Mike being a fraudulent lawyer, Harvey been a cold-hearted hot shot and Jessica telling her firm how it is. I think for me, and many others, we have to accept that this is now a different Suits. So what do we have this week?

Well, Samantha and Alex’s rivalry for the named partner position reached boiling levels, as they both have clients feuding with each other. I guess at this point I should pick a team, and if I am honest, I am Team Samantha. Only because her impact on the other characters has been significantly effective since she was introduced to the show. Apart from the episode where we see Alex as a father, his depth in character is considerably weak. He needs more moments.

“Motion to Delay” had the rest of the firm too busy to deal with Alex and Samantha’s feud for very good reasons. The firm is under attack after the prison case came back to haunt them. Tommy Bratton, remember him? Well, he’s placing an audacious conspiracy claim on the firm, bringing back Eli Gould and Frank Gallo’s daughter to help him with his case. This has Robert, Donna, Harvey and Louis scratching their heads because if he loses this case in court, he could possibly go to prison. 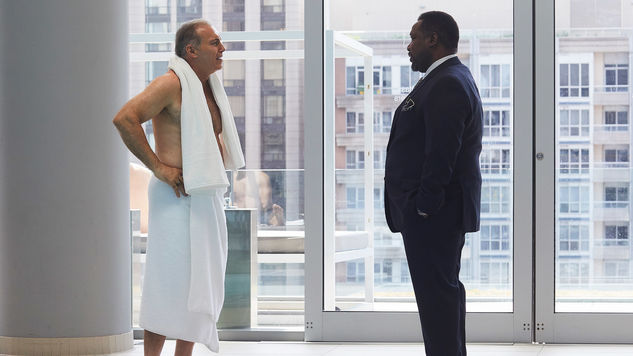 Well, it turns out the reason why Tommy was not afraid of prison is that he has cancer and not many months to live. This was his way of getting revenge and finding purpose in his life. What I find hilarious, is that the only way they could bring this case back to life is by giving a character life-ending cancer as a motive. A cheap shot maybe, but it at least gave some historic story back to life. Also, it was good to see Robert Zane sweat over his firm and watch Harvey and Louis run around trying to find ways of stopping the case. In the end, Louis finds out Tommy has cancer, prompting Harvey to give him an extra-cold visit, explaining to him that the firm will keep on triggering a motion to delay until he dies. Harsh? Yes, very, but Suits lacks so many emotions now that I just appreciated the entertainment.

Katrina and Brian are back. Suits forgot they existed these last two weeks but “Motion to Delay” brought the two “good” working friends back. It turns out that Katrina has been promoted to Senior Partner, and she names Brian as her first associate. They spend the rest of the episode building their romance, whilst Brian acts like he doesn’t understand that Katrina wants more. The two young lawyers win their first case together, which was cute, I guess. The whole Rachel and Mike scenario was cool when it happened but Brian has a newborn baby at home, so there is a lot of damage that can happen here.

In the end, Samantha and Alex cannot settle their differences, prompting the rest of the firm to care and offer advice. It turns out Alex is favourite for the named partner position but Samantha disagrees. I wholeheartedly do as well, and I do not believe it will happen. Whilst Robert sips his whiskey after defeating Tommy due to death, pondering about life and what work can do, Harvey suggests that Samantha and Alex should battle it out with their clients in court, and the winner can become named partner. I could not care less but at least we have a future explosive episode in store. “Motion to Delay”, the ninth episode of season 8, was actually good for the standard that Suits is delivering. At least there is that.