Jonah Hill and Emma Stone deliver career-best performances in Maniac, but the show’s endless imagination and eccentricity are what elevate it.

Jonah Hill and Emma Stone deliver career-best performances in Maniac, but the show’s endless imagination and eccentricity are what elevate it.

There are many words one could use to describe Netflix’s Maniac – weird, audacious, compelling, moving, clever, thoughtful – but the best is the simplest (and increasingly the rarest): Unique. There’s nothing else quite like it; not in the filmographies of its co-stars, Jonah Hill and Emma Stone, and certainly not on Netflix.

But Maniac is really its own thing. In it, Hill and Stone play Owen Milgram and Annie Landsberg, two fellow New Yorkers with various traumas who agree to participate in a pharmaceutical trial that’ll apparently free them of their mental health woes. It won’t really, of course, as this is high-concept dystopian science-fiction, but you know how it is.

All this is a good excuse for the characters to sweep out the darkest corners of their subconscious, mostly by taking on a diverse array of wacky personas that are almost all against type for the leads. Hill’s Owen is the schizophrenic scion of a wealthy family that deliberately ostracise him; Stone’s Annie is, he believes, his preordained partner in crime. His comedic inclinations are mostly dialled down and her ineffable charm gives way to something tougher and edgier. Both are brilliant, but Stone, somewhat predictably, has a better handle on the dramatic bits. 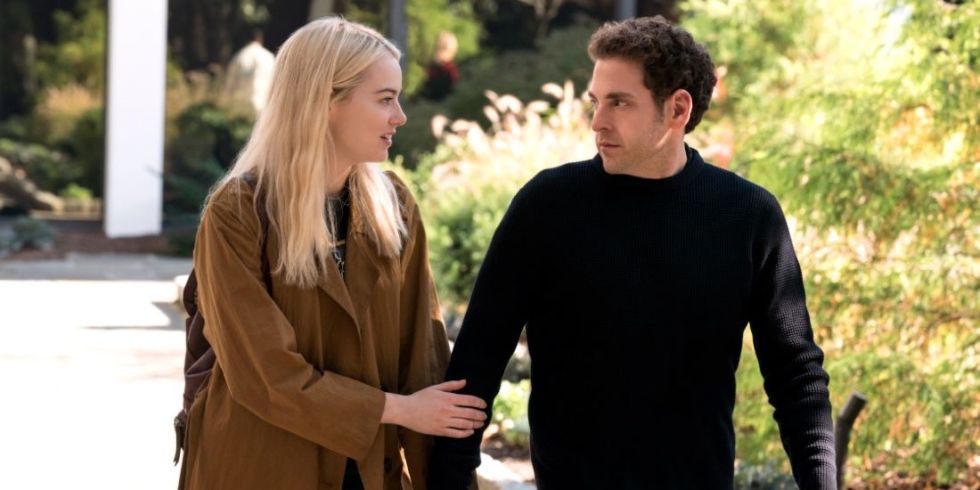 Then again the drama isn’t entirely the point. Maniac isn’t really interested in exploring the realities of depression and other mental illnesses; it’s much more about the unrealities that plague those who are alone, unconnected, and whose brains are unreliable. You couldn’t pigeonhole it as a drama any more than a dark comedy or a hundred other things, which is the point, and why so much of the ten-episode first season is devoted to off-kilter surrealist diversions that are equal parts pop-culture pastiche and therapeutic metaphor.

It shouldn’t work, really. But it does, almost all of the time, and it never really becomes obnoxious in the way you’d expect. Some of this is because Cary Fukunaga, who has just been confirmed as the new Bond director, directs every episode with the same auteur panache he lent the brilliant first season of True Detective. The rest of it is because writer Patrick Somerville stuffs his retro-futurist Big Apple with so much weird paradoxical detailing and wacky ideas that you can’t help watching with rapt attention just to see what gonzo idea crops up next. And the episodes are short, which always helps.

It’s all very good. The first couple of episodes are dense with set-up, focusing on the two main characters and their respective anxieties, but the rest of it just rapidly and enthusiastically goes nuts. But all the while Fukunaga’s command of the material keeps it from tumbling off the rails, even as stolen lemurs get involved and he starts showing off his chops for elaborate one-take tracking shots again. Maniac is the kind of show that Netflix’s next-episode auto-play was designed for. Sit back, and let it take you wherever it wants. Just don’t be surprised if neither of you have a clue where you are when you get there.