From directors Adam Collins and Luke Radford comes Outlawed, a checklist of the action-revenge genre. Your typical late-night action movie.

From directors Adam Collins and Luke Radford comes Outlawed, a checklist of the action-revenge genre. Your typical late-night action movie.

The story of Outlawed follows a military commando, Jake O’Neill (Adam Collins, most known for his stunt work in Dunkirk, Kingsman: Golden Circle and Mission Impossible Fallout) who sees one of his mission go tragically wrong, forcing him out of the force, until an old friend, Jade (Jessica Norris), needs his help to take down the corrupt businessman (Harold Archibald, played by Ian Hischen) who killed her father.

The story does play out the way you would expect in any action film that is focused on showing off the lead actor’s abilities. We know Jean Claude Van Damme, Jason Statham and Steven Seagal have made careers from this style of film. However, Outlawed does insert a side story which feels like it could easily make this film better on different levels. This side story focuses on how after the mission gone wrong Jake falls into a desperate, depressed state, with his whole life falling apart; this could tackle a serious issue because this is happening to real soldiers, but where this film misses the big trick is just glossing over it like it is nothing.

We do have to spend time focusing on Adam Collins, the lead, co-director and co-writer. He has worked in stunt work for the last couple of years, with major blockbusters under his belt, and before that, he served in the Royal Marines where he gained an exceptional amount of skills. When it comes to the modern era of skilled people in action films, we do have a new wave coming through with Scott Adkins (Accident Man) and Alain Moussi (Kickboxer: Retaliation); neither will win acting awards, but when it comes to combat we are happy to sit and watch them do their thing. Ian Hichens as the villainous corrupt businessman does get to deliver lines in a way that sounds like he is just as threatening as he is meant to be with his control over the city. When you do look at the rest of the cast we don’t get anybody that stands out with most people average to poor, and with the random drug-filled party scenes never making sense. 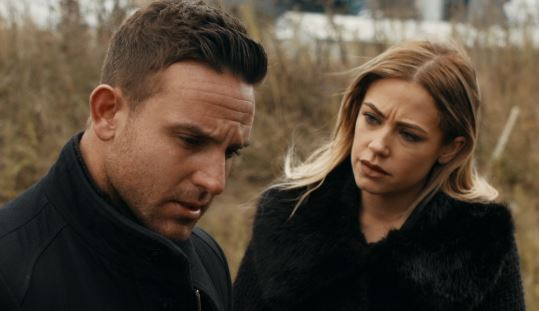 Outlawed is an action film with a military-trained combat expert in the lead role, and when we get to see the military operations being handled, these do feel authentic; the mission that does wrong plays out just as you would imagine it, too. Things are held back until the final showdown, which does need to be bigger but delivers moments that are as hard-hitting as this film gets. With the positives, though, we also need to look at the negatives in the action, which mostly come from things like dives off ledges after being shot, which can come off comical at times.

Outlawed is an action film that shows potential in Adam Collins. If you want to see a film that is what you would call a late-night action movie that doesn’t take too much of your attention, this one is for you.