“The Nitty Gritty” sees Bumpy try to secure a source of heroin while trying to keep corrupt cops off his back in another strong episode of Epix’s Godfather of Harlem.

“The Nitty Gritty” sees Bumpy try to secure a source of heroin while trying to keep corrupt cops off his back in another strong episode of Epix’s Godfather of Harlem.


This recap of Godfather of Harlem Season 1, Episode 2, “The Nitty Gritty”, contains spoilers. You can check out our thoughts on the previous episode by clicking these words.

If only we could all deal with rejection in the way that Ellsworth “Bumpy” Johnson (Forest Whitaker) does. In the opening scene of Godfather of Harlem Episode 2, “The Nitty Gritty”, Bumpy is told he has lost a step by an associate who doesn’t like the old-timer’s idea of getting Harlem organized. In response, Bumpy cuts his throat and goes about his business. It’s an old-fashioned way of doing things, but sometimes, as this episode proves, old dogs can get away with old tricks.

And Bumpy needs some tricks. He needs a consistent source of heroin that doesn’t come from the Italians, and Chin (Vincent D’Onofrio) is willing to pay fifty grand to two corrupt cops if they put Bumpy back in Alcatraz. Those two things don’t go together well. Bumpy, visiting a Cuban potential pusher, is set up and arrested. At the precinct, Captain Gary D’alessandro (Nick Chinlund) is as much a victim of his rogue detectives as Bumpy is. A new solution is needed.

That solution, in hindsight, is an obvious one. There is more dope in the police evidence locker than there is anywhere else in Harlem; they’re the biggest pushers of them all. The detectives on Chin’s payroll are a threat to D’alessandro as well as Bumpy, and the enemy of an enemy tends to be a friend. So the good Captain has them bumped off and exchanges a fat envelope with his new business partner, who has the consistent source of high-quality heroin that he needs. “The Nitty Gritty” gives Bumpy a professional victory. 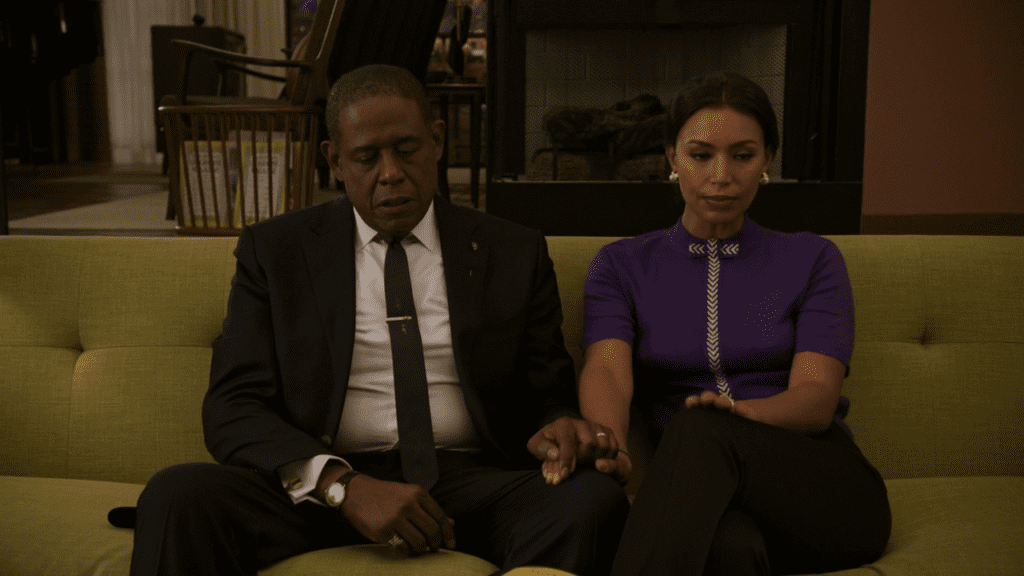 But it doesn’t give him many personal ones. That comment about being behind a step resonates with Bumpy, who recognizes that Harlem isn’t the same way he left it. His daughter, Elise (Antoinette Crowe-Legacy), is in recovery under the watchful eye of Malcolm X (Nigel Thatch) and the Nation of Islam, but in Godfather of Harlem Episode 2 she learns than Bumpy and Mayme (Ilfenesh Hadera) never told her daughter, Margaret (Demi Singleton), who she was. They raised her as their own, and Mayme, at least, wants to continue to do so — when Elise leaves rehab and visits the apartment, Mayme threatens her at gunpoint and gives her $100, presumably to use getting high. The rift between Mayme and Bumpy continues to widen throughout “The Nitty Gritty”.

So, too, does the relationship between Chin and his wily daughter, Stella (Lucy Fry), who continues to conduct her forbidden long-distance romance with the talented exiled musician, Teddy (Kelvin Harrison Jr.). Chin confesses to his priest that he has thought about killing her, but he devises another solution, hooking her up with the incredibly smug son of an associate, who suggests they go and listen to “Negro music”. They do, and Stella unwittingly leads him to a musician friend of Teddy’s, who is murdered immediately afterwards on the charge of being Teddy. Chin, then, believes his problems are over, but in the closing montage of Godfather of Harlem Episode 2, Teddy returns to Harlem.

As with the premiere, which was nonetheless a little more bombastic, “The Nitty Gritty” is at its best when its key figures sit down and simply interact. There are good exchanges between Bumpy and almost everyone, including Malcolm, who continues to give him hard truths, and a passive-aggressive sit-down meeting with Chin which is pure mob theatrics. Malcolm gives a compelling speech to Elise about her recovery, and Mayme has some fun interactions with Adam Clayton Powell Jr. (Giancarlo Esposito) about securing some government funding for her community initiatives. Godfather of Harlem Season 1, Episode 2 continues to impress with its worldbuilding texture and characterization, and that fusion of history and drama; it’s a show with a whole load of potential that I hope continues to improve as the weeks go on.