Godfather of Harlem Recap: Breaking the Code of Silence

“Il Canto de Malavita” deals with the fallout of a Harlem-shaking testimony, as loyalties continue to be strained and debts must be repaid in full.

“Il Canto de Malavita” deals with the fallout of a Harlem-shaking testimony, as loyalties continue to be strained and debts must be repaid in full.


This recap of Godfather of Harlem Season 1, Episode 6, “Il Canto de Malavita”, contains spoilers. You can check out our thoughts on the previous episode by clicking these words.

The Harlem-shaking event of “Il Canto de Malavita” is Joseph Valachi (Richard Petrocelli) sitting before a Senate hearing and naming names in the Italian mob: Including Vincent Gigante (Vincent D’Onofrio) as the acting head of the Family, and a long-time inside man who turns out to be someone closer to Bumpy Johnson (Forest Whitaker) than he would like. Godfather of Harlem Episode 6 opens with Valachi testifying at the enthusiastic urging of Adam Clayton Powell (Giancarlo Esposito), while Bumpy, Chin, Costello (Paul Sorvino) and Joe Bonanno (Chazz Palminteri) follow along on the television.

They have problems of their own. Since Bumpy and Bonanno went behind Chin’s back, Chin has had two of Joe’s men whacked and stolen the product that Bumpy was supposed to move; now the money that Joe paid Bumpy up-front is past-due, and he has no way to raise it. If he kills Valachi, though, he can consider his debt cleared. But killing Valachi won’t be easy.

This is the A-plot of “Il Canto de Malavita”, but that’s probably overselling things a bit. The episode has lots of competing storylines that overlap and intersect in a messy tangle. The Honorable Elijah Muhammad (Clifton Davis) can be seen in Godfather of Harlem Episode 6, laying out his problems with Malcolm X’s (Nigel Thatch) publicity and relationship with Bumpy, and eventually asking Bumpy’s rejuvenated daughter Elise (Antoinette Crowe-Legacy) to spy on her new mentor. Elijah Muhammad is the first person we have seen Malcolm X be deferential towards, and the first to float the possibility that Malcolm and the Nation of Islam — at least his version of it — aren’t unequivocally good for Harlem and its residents.

And then there’s Ernie Nunzie (Rafi Gavron), who has been found-out after failing to kill Teddy Greene (Kelvin Harrison Jr.) and then lying about Stella’s (Lucy Fry) night in jail to keep it quiet. In “Il Canto de Malavita”, Chin’s goons fill him in, and he’s given a picture of the real Teddy and told to do the job properly. He goes on the warpath immediately, but at first only finds a note reading: “Sorry Ernie, we left town.” 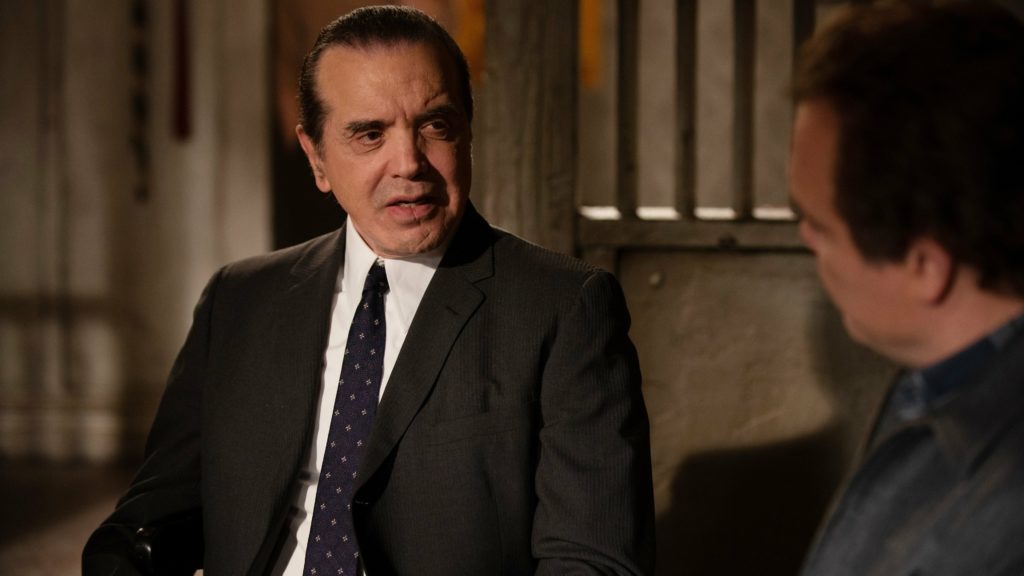 They haven’t, obviously. They have nowhere to go and no way to get there, and Teddy is contractually obligated by his record label to play local gigs, which Stella knows makes him vulnerable. He doesn’t want her there when he does so, but we know she will be since she can’t help herself — indeed towards the end of Godfather of Harlem Episode 6, Ernie arrives at the club where Teddy is performing, but Stella intercepts him and talks him out of the assassination.

With Chin having been named in court, he’s subpoenaed by the FBI to appear in person at the hearings but wriggles out of it by feigning mental instability. In a funny scene, a Special Agent (Kevin Dunigan) arrives at Chin’s home to be greeted by his wife, Olympia (Kathrine Narducci), who leads him to an upstairs bathroom where Chin is fully-clothed in the shower with an umbrella.

Powell needs a win in court, though, since Esther James has slapped him with a potentially ruinous lawsuit — financed by those annoyed at his attacks on the numbers racket — and Bumpy’s refusal to name names in the mob left him without a leg to stand on, legally-speaking. He attempts to appeal to Costello in “Il Canto de Malavita”, and is told in no uncertain terms that if he eases off Valachi then Esther will quietly go away.

But Powell won’t ease off Valachi, and since Bumpy’s attempts at whacking him result in failure thanks to some bad intel from Guapo (Luis Guzmán), the presence of an inside man is brought up at the hearings. Chin admits it’s Guapo, which devastates Bumpy and Mayme (Ilfenesh Hadera), who doesn’t want her husband to kill his long-time friend, which he has to in order to wipe his debt. And plus, we know how Bumpy feels about loyalty.

In a sad scene, Bumpy kills one of his oldest friends. Powell, unaware, later arrives to threaten Bumpy with Guapo’s testimony, as revenge for not ratting on the mob in the first place. If only he knew. Godfather of Harlem Season 1, Episode 6 ends with Stella visiting Bumpy, telling him she needs his help.