The Mandalorian Recap: Disney+ Shoots First… And Hits Its Target

The Mandalorian gets off to a fine start in its opening chapter, with enough action and style and Star Wars-y goodness to satisfy longstanding fans of the franchise.

The Mandalorian gets off to a fine start in its opening chapter, with enough action and style and Star Wars-y goodness to satisfy longstanding fans of the franchise.


This recap of The Mandalorian (Disney+) Season 1, Episode 1, “Chapter One”, contains spoilers.

The Mandalorian is a very good show for lots of easily identifiable reasons — it’s well-cast, stylishly shot, expensive and expansive, with solid action, a great blend of tones and inspirations, and the same kind of swaggering confidence that Pedro Pascal exudes as its iconically-helmeted hero. But it might become a great show. And if it does, it’ll be because of a certain nebulous, indescribable quality, the kind of vibe a show only gets from being made by fans, for fans, in a way that isn’t pandering or easy. The Mandalorian Episode 1 is recognizably the beginning of a Star Wars story, populated by the same kind of rubbery alien ruffians and aggressive indigenous lifeforms, shrieking with the same bolts of blaster fire, full of enough knowing nods and incidental details to please longtime fans without alienating newer or more casual ones. Yet it still feels like something new. It feels like what a live-action Star Wars show could and should be. It feels just about right.

Partly that’s thanks to Disney’s monopoly on major franchise-filmmaking and their bottomless Scrooge McDuck pockets — the resources, broad interest, and exciting new platform are available now, when once they weren’t. But it’s also probably something to do with the involvement of Dave Filoni, a minor deity in Star Wars fandom with a nerd’s-eye-view of the broader continuity but the willingness to interrogate it for all its weirdest and most interesting ideas. Whereas most of his Star Wars work — The Clone Wars, Rebels, and Resistance — has been animated and insulated by a distinct for-kids sensibility that was off-putting for older fans, The Mandalorian is the opening salvo in the ever-intensifying Streaming Wars — proof that Disney+ doesn’t just boast a ludicrous archive, but also subscription-selling original content.

What’s more, that original content is unavoidably tangled up in the mythology of pop-culture’s two most expansive and exciting fictional universes. The Mandalorian Episode 1 opens by depositing its unnamed protagonist (Pascal) on a random planet where he’s picking up a bounty, Mythrol (Horatio Sanz), whom he promptly freezes in carbonite and hands over to his employer, Greef Carga (Carl Weathers). Between those two events, there is a fun fight scene and a tussle with a giant aquatic slug and some banter about spaceship toilets, but no backstory or explanation or attempt to make the audience feel comfortable and acquainted. Why would there be? This is a Star Wars show. For most of us, that’s all we need to know.

The Mandalorian knows this about itself. That’s why its unhurried, casual pace and show-don’t-tell storytelling are so easy to get swept along with. And it’s why a mysterious bounty from a nakedly sinister client played by Werner Herzog, of all people, is enough for both the Mandalorian and the audience to move on to the next planet, the next mission, the next problem. The structure is reminiscent of a video game; a quest is given, completed, and rewarded, then the cycle repeats. Between the completion of his old assignment and the undertaking of the new one, the Mandalorian even melts down his payment to upgrade his armor in a little hideout where another Mandalorian hints at some backstory to unpack whenever the show is ready. 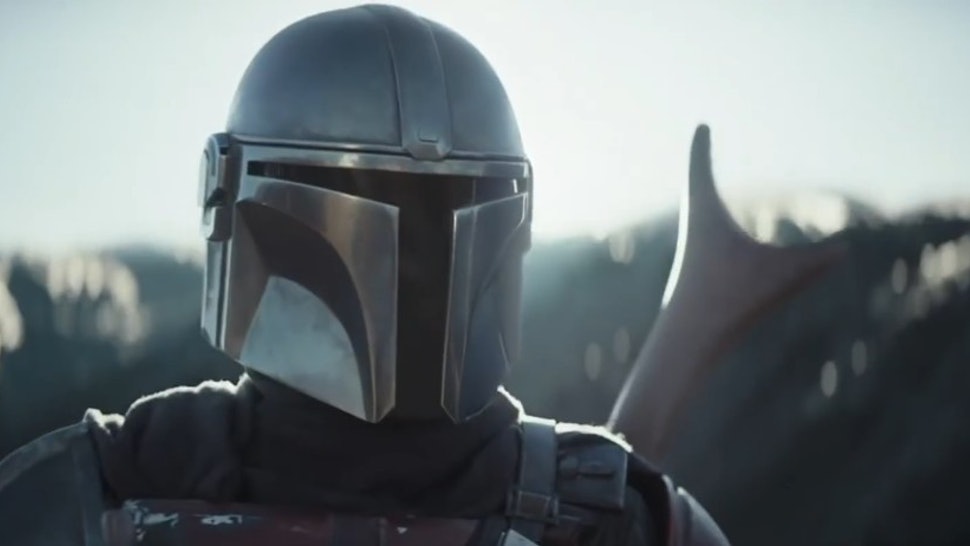 At his next destination, the Mandalorian meets Kuill (Nick Nolte), a local salt-of-the-earth type who gives him the local lowdown and teaches him to ride the native blurrg, beasts of burden that are equal parts terrifying and adorable. The gamey similarities continue — Kuill is essentially one of those eccentric characters who hang around on the edge of towns giving out tips. Whenever he finishes speaking he declares “I have spoken”, which The Mandalorian Episode 1 plays for a slightly different tone each time its deployed.

The climactic fight takes place in a compound that was obviously designed specifically for it. The Mandalorian teams up with a bounty hunter droid, IG-11, voiced by Taika Waititi, which constantly threatens to self-destruct whenever the fight gets too intense. It’s a nice balance of tones that proves The Mandalorian isn’t as interested in being self-serious as its marketing might have suggested. Which isn’t to say it’s pulling punches — someone gets bisected in the first couple of minutes. But there’s something essential about humor in a Star Wars story, and it’s relieving that it’s present, and as high-quality as everything else.

And then there’s the last-minute twist which threatens to upend a lot of what we know about the continuity. After clearing out the compound, the Mandalorian discovers his bounty — a baby Yoda. Well, not literally a baby Yoda, obviously, but a baby of the same species as Yoda. I have no idea what that species is called, but you know what I mean. The frog thing.

Why does Werner Herzog want baby Yoda dead? That’s the mystery that’ll carry us into the second episode (out this Friday), and a sentence I never thought I’d write. If nothing else, I can thank The Mandalorian for that.