Home » TV » Godfather of Harlem Recap: Put A Ring On It

Godfather of Harlem Recap: Put A Ring On It

“Rent Strike Blues” weaves the ongoing war between Bumpy and the Italians among the Harlem rent strikes, and virtually nobody gets what they were hoping for.

“Rent Strike Blues” weaves the ongoing war between Bumpy and the Italians among the Harlem rent strikes, and virtually nobody gets what they were hoping for.


This recap of Godfather of Harlem Season 1, Episode 9, “Rent Strike Blues”, contains spoilers. You can check out our thoughts on the previous episode by clicking these words.

Set against the backdrop of the 1963-4 Harlem rent strikes, Godfather of Harlem Episode 9 sees everyone trying to benefit from the situation and absolutely nobody actually doing so, from the suffering citizens living in rat-infested slums to the gangsters who control them to the elected representatives and religious groups professing to have the city’s best interests at heart. As soon as we see Adam Clayton Powell (Giancarlo Esposito) directing the non-violent protest in the opening of “Rent Strike Blues”, we know he’s up to no good. And Mayme (Ilfenesh Hadera) having chained herself up doesn’t bode well either, especially once the non-violent protest becomes decidedly violent and she’s photographed being rescued by none other than Doug Jones (Haaron Hines).

Not that Bumpy (Forest Whitaker) really has a leg to stand on when it comes to extramarital goings-on, since he sees Amy (Joanne Kelly) while out and about and learns she’s also involved in the strikes, funding Powell’s lawyers so that he can expose the real names behind the shell company which owns the decrepit tenements. She will, after all, do anything to “advance the cause of the negro”, which she proves by having sex with Bumpy in the toilets. Point proven, I suppose.

True to his name, Bumpy bumps heads with Powell over his plans to disseminate the names of the buildings’ real owners, since many of the Italians he needs for his drug-running business are among them. Not that they don’t have enough problems. The war between Joe Bonanno (Chazz Palminteri) and Chin Gigante (Vincent D’Onofrio) is still underway, after all, but Chin has an idea which might solve that problem. He reveals to Frank Costello (Paul Sorvino) that it was Bumpy, not him, who whacked Made Man Richie Zambrano (Louis Cancelmi), and if he can prove it, Frank will arrange a face-to-face between him and Bonanno.

Meanwhile in Godfather of Harlem Episode 9, the Honorable Elijah Muhammad (Clifton Davis) is back in town, and not best pleased with Malcolm X’s (Nigel Thatch) self-serving efforts in mobilizing the Nation of Islam in political disputes like the Harlem rent strikes — they’re supposed to be a religious organization, after all, and if Malcolm is to be Elijah Muhammad’s successor, he could do with making fewer enemies, especially since so many higher-ups already think that he’s manipulating the Nation for his own ends. I should note that this scene is a bit leaden with expository dialogue; at one point Elijah Muhammad just starts artlessly reeling off Malcolm X’s entire biography.

In his efforts to prove Bumpy offed Zambrano, Chin sends Ernie (Rafi Gavron) out to find Flossie (Nikkole Salter), the working girl who Zambrano favored and who was there the night he died. His initial inquiries don’t turn up much, but he spies that one of the other girls clearly knows more than she’s letting on. More on this soon. 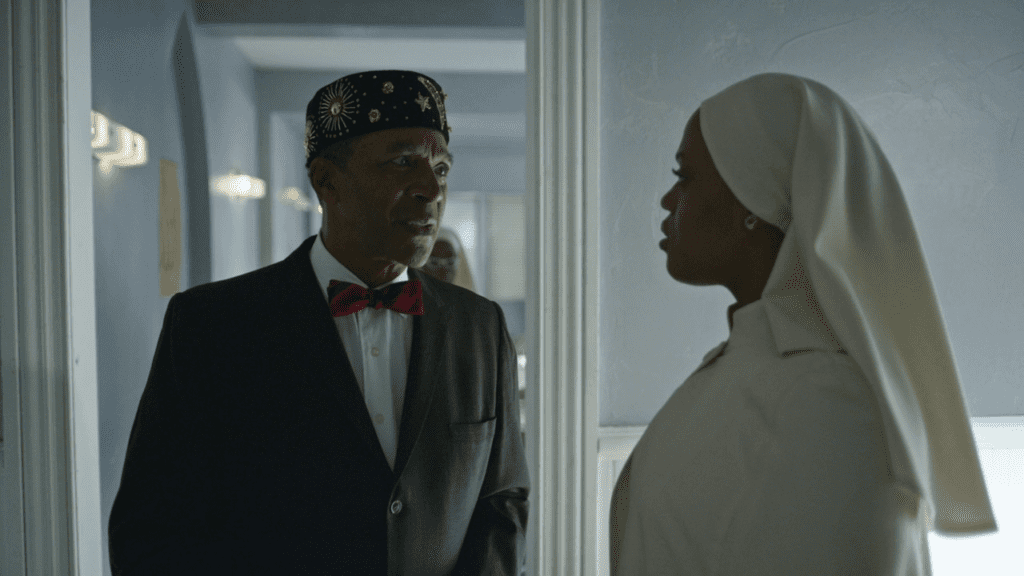 Bumpy, meanwhile, is not having much luck. He tries to use Esther James to leverage Powell, which fails, and then he returns to his luxury penthouse only for Margaret (Demi Singleton) to excitedly present him with the newspaper, where Mayme and Doug are plastered all over the front page. He confronts her about this, and she confronts him about Amy, and I genuinely couldn’t tell quite how much either of them knows about the other’s activities. Marriages are complicated.

You might recall that a few episodes back Elise (Antoinette Crowe-Legacy) was enlisted as the “eyes and ears” of Elijah Muhammad, but in Godfather of Harlem Episode 9 she has seemingly taken too much of a shine to Malcolm to rat him out, much to the annoyance of both Elijah Muhammad and fellow sister Marnie (Afi Bijou), who I guess is in on the scheme too? Malcolm is fretting that the fight against the white man is being lost, so is perhaps too busy to notice his faithful acolytes spying on him, even if Marny isn’t exactly subtle about it.

Speaking of not being subtle, Teddy (Kelvin Harrison Jr.), now a local celebrity, is enjoying his newfound fame and fortune by draping himself with women and throwing bills around. Stella (Lucy Fry) goes to see him, and he tells her that she’s a confused little white girl and he doesn’t need her anymore — a retort so charming that she immediately goes home and tries to commit suicide. The good thing about this development is that it gives Vincent D’Onofrio an excuse to act his slacks off. So devoted is Stella to Teddy that the first thing she asks her father is if he’ll leave him alone, but it’s obvious her true love was Lorenzo Bonanno. She asks her father about that, too, and he admits what he did, with some caveats — he was overprotective, she was young, she secretly had an abortion, you know the drill.

As it happens, what I said earlier about nothing in “Rent Strike Blues” going well for anyone wasn’t entirely accurate. Chin comes away from Godfather of Harlem Episode 9 in the best position he’s been in for a while, and it begins when Ernie is able to collar the girl from the club and bribe her into revealing that Flossie is back in Harlem. He’s able to track her down and take her to Chin and Costello, who interrogate her. She knows she isn’t getting out of the situation alive, so while she confessed what Bumpy did, she also makes sure they know she enjoyed watching it.

The building landlords hire private muscle to evict the tenants. Powell, thanks to his digging, also discovers that some of the buildings are owned by Bumpy himself, which only further disillusions Malcolm; he eventually has to be persuaded by Elise to remain on Bumpy’s side and believe in his usefulness as a political tool, even if he does have to remind him to “get conscious.” Mayme fights Bumpy’s corner too, but to Powell: “It’s easy to think you hit a home run because you were born on third base,” she says to him, reminding him that Bumpy has made the decisions he has made in part because he scarcely had any others available to him. She even finds a moment to throw some shade Amy’s way as she leaves.

Unable to get Powell to budge, Bumpy tells Bonanno that they’ll have to fight the matter in court — and in court, Powell gets a victory; the judge rules in the tenants’ favor, and the names of the Italian owners are revealed, though Bumpy’s isn’t among them. Bumpy prevents Powell from getting whacked on his way to the hearing. And Chin, allowed to meet with Bonanno by Costello, manages to convince his enemy that it was Bumpy, not him, who killed Lorenzo and manipulated this entire war. Now, what are they going to do about it?