Spinning Out Recap: Putting Up Walls

Spinning Out Season 1, Episode 4, “Keep Pinecrest Wild” hones in on the “pushing people away” theme as Justin, Kat and Marcus deal with their personal issues.

Spinning Out Season 1, Episode 4, “Keep Pinecrest Wild” hones in on the “pushing people away” theme as Justin, Kat and Marcus deal with their personal issues.

It’s clear in Spinning Out that these teenagers have issues whereby they place up barriers to prevent anyone from getting close them. Episode 4, “Keep Pinecrest Wild” hones in on that in a chapter that focuses more on character development than the skating itself.

Spinning Out Season 1, Episode 4 opens up with a flashback of a younger Carol (January Jones); she’s practicing on the ice — she’s clearly talented. In the present day, she’s watching Kat closely. Justin joins the rink and they practice Romeo and Juliet. Kat is struggling to track and connect with Justin, ruining the entire routine. They have a senior pair test in two weeks — they haven’t got much time left.

Kat storms into the audience section and asks her mother why she is watching. Her mother claims that Kat is not a pair skater — “You’re a lone wolf”. Kat asks her mother to stay out of it and vows to prove her wrong.

To help with their connection issues, Kat and Justina attend an acting class. In the class, they are asked to connect emotionally. Justin tells her he struggles to connect with her and Kat reacts angrily, storming out. Meanwhile, Serena has learned how to do a double flip-triple-toe, so Jenn gets annoyed and does it herself, further aggravating her injury.

At the restaurant, Kat tries to put up a banner that reads “Keep Pinecrest Wild”. Marcus helps her, grabbing her waist by accident. Kat asks Marcus if he will be skiing for the charity event this year and asks if she can go with him. Marcus declines her offer, stating that she always lets him down and he feels like Kat “gaslights” him.

Kat attends a group that I assume is for people who suffer from bipolar syndrome. Kat expresses her feelings and how she shuts everyone out. The leader of the group says it is not her bipolar that strengthens the boundaries. The leader advises Kat to take baby steps.

Jenn approaches Serena and asks why she has been training non-stop due to the other mothers judging her. Serena explains she is on a trial period. Despite being a close competitor, Jenn advises that the only reason Mary-Ann is bothered is that Serena has become a genuine threat.

Another flashback in Episode 4, “Keep Pinecrest Wild’; Carol remembers a time she was skating and her baby would not stop crying. In the present day, she picks up a dummy and returns it to the mother of a crying baby. When she reaches the cashier she is low on money. Mitch runs into Carol and they agree to go for coffee.

Kat decides to open herself up and watches Marcus ski; he wins the fastest time. When Marcus reaches the bottom of the ski slope Kat tells him how good he is. She also points out that she “showed up”. One of his friends lets Marcus know that a coach wants him to compete professionally but he declines politely. Kat and Marcus walk off together, hand in hand. 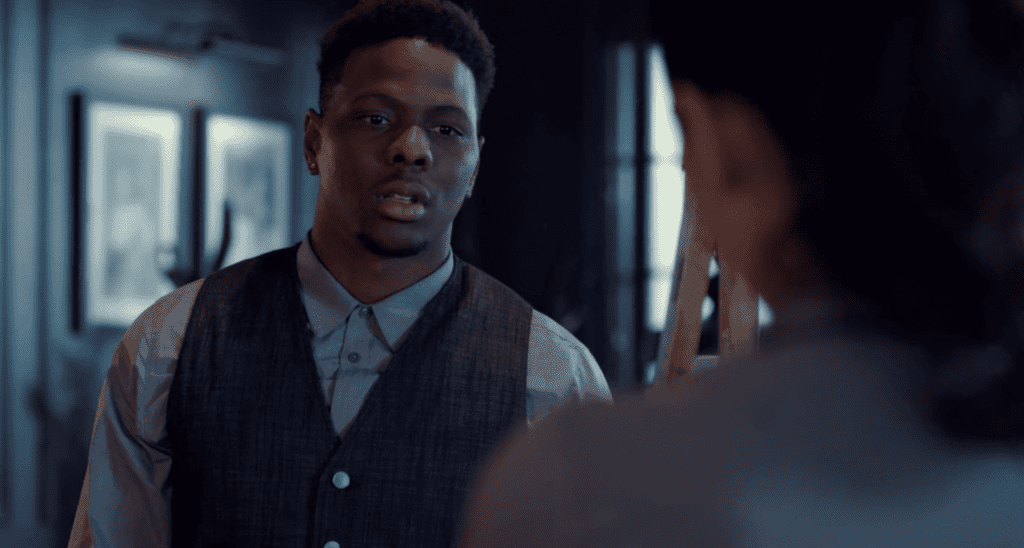 Mitch and Carol go for drinks instead in Episode 4. Carol asks about his ex-wife. Mitch claims this is a date and that his ex-wife cheated on him. In return, Mitch asks Carol about her skating career. The pair orders more drinks, enjoying each other’s company. Meanwhile, Jenn raises to Kat that she is on a date with Marcus.

Justin is working behind the bar for the charity event; Kat calls him an a–hole and orders two beers. Justin asks Jenn why Kat is so “cut-off” but Jenn rejects that idea, pointing at Marcus and Kat in the corner looking intimate. Jenn asks Justin for more painkillers. Justin politely tells her he cannot help her and that she should be honest with her father.

Now it is established as a date, Marcus asks Kat why she did not go to London. Kat explains that skating is like breathing, she can’t imagine not doing it. As they are both about to kiss for the first time, Justin intervenes and says he needs to speak to Kat. Justin tells Kat that he is not an a–hole and that every girl he’s slept with in the past always came back. A furious Kat says this is all about Justin’s pride — “We slept together and I didn’t come back for more”. Justin walks out saying he “is out”.

Mandy chases after Justin after seeing the argument. Justin cruelly tells Mandy that this is his mother’s event and accuses her of only being here for his father’s money. Mandy ignores the noise and tells Justin that the light in his eyes has returned since skating with Kat — “Don’t let being afraid stop you from feeling something”.

Kat visits Serena by climbing through her bedroom window. Kata asks her whether she’s like her mother — Serena rejects that idea. Kat tells Serena about her date with Marcus and how Justin arrived and ruined it. Serena laughs, claiming there is nothing wrong with her — she’s caught in between two hot guys who are into her. Serena jokingly says, “I told Mary-Ann she has a fat face”. Serena is finally fighting back against the critics.

While Marcus continues to wait for Kat, he tells his friend that he has decided to join ski school; in doing so, he has turned down medical and joins the team to celebrate.

Mitch and Carol return home kissing. A flashback reveals Carol continued to skate, turning up the music to drown out the baby’s cries. A man named George picks up baby Kat and looks at Carol disapprovingly. Carol stops kissing Mitch, stating that she cannot carry on.

Spinning Out Season 1, Episode 4, “Keep Pinecrest Wild” closes with Kat meeting Justin despite telling Marcus she cannot come back out. Justin brings up the time they slept together and how he was hurt that she never called back — “I thought we had a connection”. Kat tells him she was not in a great place back then; they apologize to each other. Justin shows her a place to skate outside — a place he has not been to since he went with his mother. The two skate and they seem to be in sync. Marcus sees them and looks hurt. Kate and Justin look at each other for a period of time as they finish their routine and then Kat skates off.

We have a love triangle folks.