“Hand Pocket” spends most of its runtime on one specific style, as the newly formed teams face off against each other.

“Hand Pocket” spends most of its runtime on one specific style, as the newly formed teams face off against each other.

This recap of Baki season 3, episode 5, “Hand Pocket”, contains spoilers. You can check out our thoughts on the previous episode by clicking these words.

“Hand Pocket” once again picks up right where the previous episode left off, with Oliva squaring off against Ron, whose unusual martial style is interesting enough to inspire the title of the episode. Baki and Yujiro look on, side by side, which doesn’t go remarked upon. Yujiro is quietly impressed by Ron’s style and tells Baki to learn from it.

Oliva, inspired, mimics the hands-in-pockets stance in his tiny bodybuilding thong. Ron counters by removing his own hands, to many gasps from the crowd, and then pimp-slapping Oliva. Ron’s clearly annoyed by Oliva’s fronting and the obvious skill disparity between them. Oliva gets overconfident and Rob easily discombobulates him. Yujiro continues to explain the style to Baki, and the animation helpfully provides diagrams to explain his points.

Oliva reckons he’s cracked the style, and his gloating makes Ron furious. When Ron opens up, Oliva bides his time, eventually bringing both of his fists down on Ron’s shoulders, seemingly defeating him. Ron, however, gets back up, and the hand pocket showdown continues. Ron goes all out, but Oliva gets him with the same finesse again, grasping his head between both hands and delivering a gargantuan headbutt that flattens and mangles Ron’s nose. Ron attempts to counter with a spearing hand, but his fingers all crumple against Oliva’s abs. He delivers another Glasgow kiss, and another — that last one makes a real mess. 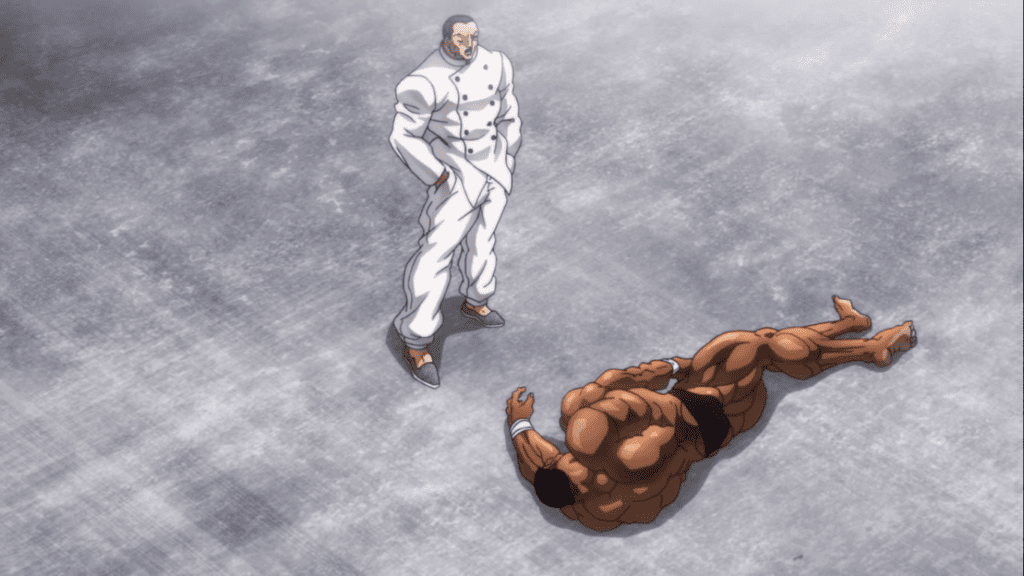 Even as Ron slumps, maybe unconscious, maybe dead, but certainly worse looking, his hands remain in his pockets.

Backstage, Kaku is dismayed by the loss after the promise of a perfect win. He wants to fight the next four matches himself, but his son, Shunsei, is having none of that. He proposes one kill per person. Shunsei’s match is against Baki, who demolishes him so easily that a narrator has to break down his techniques. As he leaves, he gives his father a high-five. When Shunsei awakes he’s greeted by Kaku, who tells him to give up on martial arts.

Next up: Retsu versus Jaku. The latter bonds with Baki backstage over the inspiration of Japan’s youth, which feels like a last-minute attempt to make him a sympathetic figure. When the fight starts, Jaku offers his hand. Both men shake, and Jaku attempts a sucker punch — it fails, which earns him the ire of the crowd. He then reapproaches Retsu with the offer of forming a team. He tries another sneak attack that is once again reversed by Retsu. As the crowd is outraged by Jaku’s cowardice, Retsu has to decide how to fight him, which is where Baki season 3, episode 5 ends.