Full of action, emotion, and great-looking fantasy, Wizards: Tales of Arcadia was worth the wait, even if it isn’t quite the epic conclusion it was advertised as.

Full of action, emotion, and great-looking fantasy, Wizards: Tales of Arcadia was worth the wait, even if it isn’t quite the epic conclusion it was advertised as.


This review of Wizards: Tales of Arcadia is spoiler-free.

The Tales of Arcadia have been long-winded in their telling. Beginning back in 2016 with Trollhunters, a family-friendly Netflix series about transplanting medieval archetypes into contemporary suburbia, the very strange but really rather good groundwork was laid for a wide-ranging and deeply interconnected story that would span not just several seasons but multiple series’. The second was 3Below, in 2018. Wizards marks the long-awaited epic conclusion, and it isn’t really that, even if it’s still very good all the same.

Ordinarily, very few people would care about such a thing, at least not to the extent that they evidently do. But Tales of Arcadia is the brainchild of Guillermo del Toro and a product of DreamWorks Animation, so there’s a creative pedigree to its expansive mythology and elaborate visual design that earns it deserved attention. The wait for Wizards has been long and impatient, but now it’s finally here, it’s like catching up with old friends – literally, in many cases, since it pulls heavily from Trollhunters and is aimed squarely at those with more than a cursory knowledge of the franchise.

That hostility to newcomers smacks of a grand finale, and there’s plenty here that reinforces that notion, with an appropriately epic feel in how it pulls together longstanding characters and mythology into a Game of Thrones-y Middle Ages Camelot. But that would be giving the wrong impression, somewhat. All these things are here, yes, and mostly in the right proportions, but by the end, Wizards: Tales of Arcadia hasn’t exactly resolved every character arc and neatly knotted every plot thread. This isn’t a complete resolution. 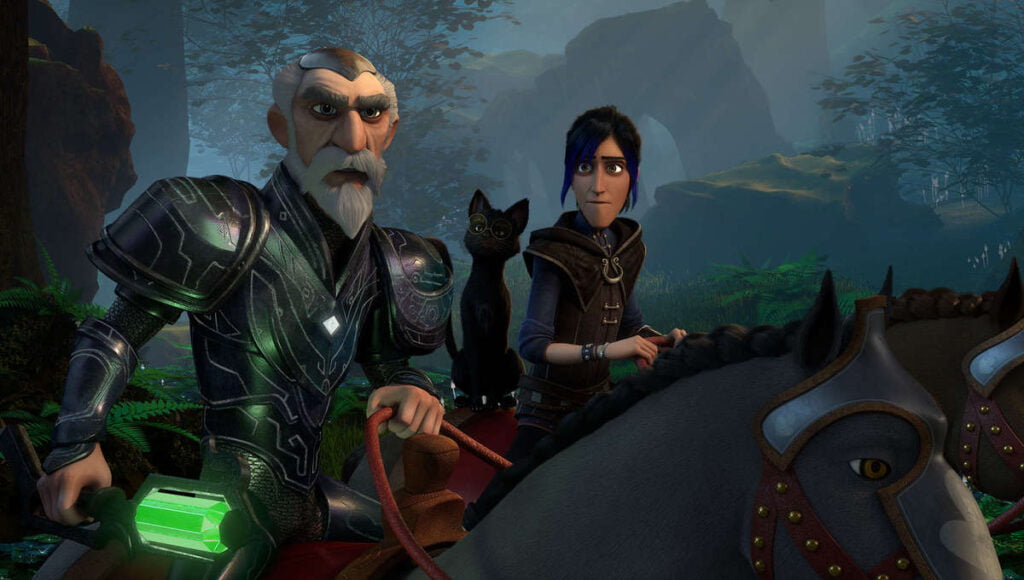 Fans have been waiting so long that this can’t help but feel like a disappointment, even if reaching the so-called conclusion is so much fun that you scarcely notice. Modern-day barista Douxie (Colin O’Donoghue), long-time apprentice to Merlin (David Bradley) and companion of flying cat Archie (Alfred Molina), is given a protagonist promotion in a wacky adventure that begins in the Arcadia skies but quickly rewinds to a past Camelot where Trollhunters favorites including Claire (Lexi Medrano), Toby (Charlie Saxton), Jim (Emile Hirsch), Merlin himself, Morgana (Lena Headey) and Gunmar (Clancy Brown) are all reunited in a new setting and alongside some new faces that help to give fresh insight on old mythology and ideas. It’s almost fan-fiction.

But it’s not, and the last thing Tales of Arcadia: Wizards feels is played-out. On the contrary, much of it feels fresher than ever, from new introductions in the cleverly interwoven narrative to the pure, facile quality of the art design and animation, which is better than it has ever been and given more excuses than ever to really show how. It’s a tremendous-looking show full of imagination, scale, and detail. If you had to imagine an epic conclusion to Trollhunters, this is pretty much exactly what it’d look like.

But the unavoidable reality of Wizards is that, for all its grand marketing posturing and the repeated insistence that its ten-episode season would conclude the story, it ends on a cliffhanger, with plenty unresolved. That feels very much like a slap in the face to a devoted fan base who’re been left on tenterhooks while nebulous plans for some kind of continuation are talked about and teased. It’s a deeply cynical move for a series that has prided itself on earnest imagination and enthusiasm for virtually its entire existence. Of course, fans would tune in to see more of these characters and this world – but haven’t they done that already?