While it might essentially be a retread of A New Hope and a bunch of other Original Trilogy story beats, Star Wars: Episode VII – The Force Awakens revitalizes the franchise with a youthful energy, a compelling villain, and a fine cast.

While it might essentially be a retread of A New Hope and a bunch of other Original Trilogy story beats, Star Wars: Episode VII – The Force Awakens revitalizes the franchise with a youthful energy, a compelling villain, and a fine cast.

STAR WARS: EPISODE VII – THE FORCE AWAKENS IS PART OF THE CURRENT STAR WARS CANON. CHECK OUT THE TIMELINE.

The more I think about it, the surer I become that the release of Star Wars: The Force Awakens was the biggest cinematic event in my twenty-seven-year existence. I’m certain of it, in fact. The reason I know this is because of a video I saw on Facebook. It compiled the greatest pieces of goal-scoring and play-making in the career of long-time Manchester United midfielder Paul Scholes, and in the comments, some dick had posted a spoiler, a big one, for The Force Awakens. That’s how deeply-entrenched in popular culture Star Wars really is. In a random comment on a totally unrelated post by a website almost diametrically-opposed to the very idea of science-fiction, some troll knew that he could ruin the day of thousands of people by revealing a plot point of a movie. And he did.

Upon reading that spoiler I experienced a kind of solidarity with those thousands of strangers that I’ve rarely felt as a human being and certainly never felt as a film fan. I was irrationally angry. But that’s Star Wars for you, isn’t it? A galaxy far, far away that feels as close and significant as the one you’re living in.

What’s funny is that nobody should care. Star Wars hasn’t been good since 1983 – seven years before I was even born. George Lucas spent six long years between 1999 and 2005 slowly tormenting his fans with the gaudy, overwrought tripe that was the prequel trilogy (The Phantom Menace, Attack of the Clones and Revenge of the Sith), somehow continuing to fundamentally misunderstand the appeal of the universe he himself created, until all that remained was an embarrassing computer-generated creative husk that everyone hated, and reams of multimedia schlock in an expanded universe that nobody understood. Most of that is gone now. Disney destroyed it with about as much ceremony as Darth Vader detonating Alderaan. How this franchise still has any cache is, frankly, beyond me, and how the release of the seventh main series movie became such an all-encompassing cultural moment is equally as puzzling, although I suspect a large part of it is thanks to J. J. Abrams being hired to co-write and direct it.

Not that there’s anything remarkable about J. J. Abrams. He’s an average technician who’s nowhere near as clever as he thinks he is, and his obnoxious “mystery box” movie-marketing shtick is no small amount of hipster horseshit. But the one skill of genuine note that he has as a filmmaker is an ability to mimic the broad style, theme, and feel of other people’s movies, which pretty much makes him the industry’s number one draft pick when it comes to revitalizing something like Star Wars. From the beginning, the pre-release hype surrounding The Force Awakens revolved almost exclusively around the idea of the movie essentially being a fan-film; a $200 million corrective to the sins of the prequel trilogy built on a decade-plus of fanboy complaints. And if anybody was going to be able to pull that off it was J. J. Abrams. 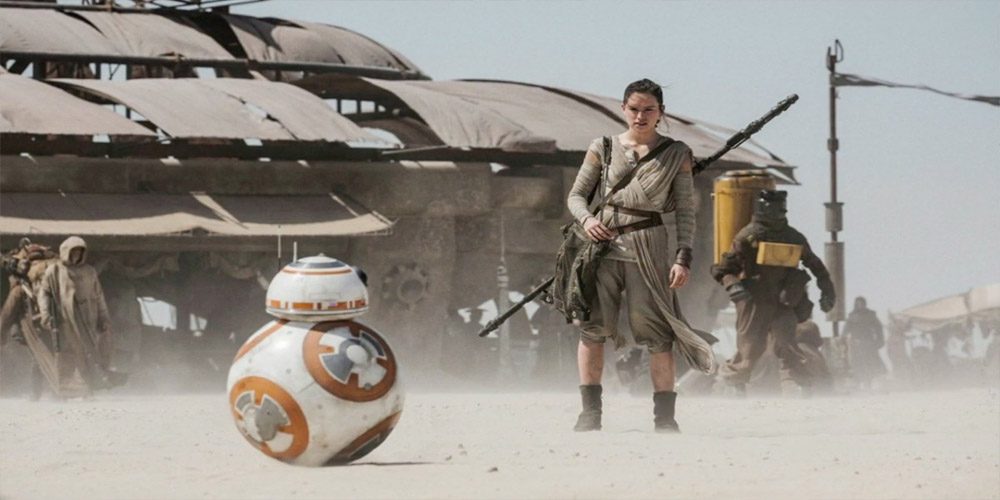 He pulled it off. What’s more, he pulled it off in spite of – and, if we’re being honest, largely because of – leaning so heavily against the idea of what Star Wars should be: practical models and effects; Luke, Leia, Chewie and Han Solo; X-Wings, TIE Fighters, Star Destroyers, the Millennium Falcon; and “the Force”, but as it should be, which is nothing to do with midi-chlorians and everything to do with narrative convenience embedded directly into the story itself. Even that story is a deliberate, almost beat-for-beat retread of A New Hope; if there’s one thing Abrams understands it’s that nothing about Star Wars has ever been original.

Several critics have taken it upon themselves to daringly point out that The Force Awakens is little more than A New Hope with better special effects, which strikes me as an oddly hollow criticism considering that A New Hope was little more than Flash Gordon with better special effects. The series has always reveled in its unsubtle wish-fulfillment fantasies being writ large across the galaxy, but if you ever stopped to think about how real human beings might behave, even for a moment, you’d realize that nobody in these movies should be doing any of the things that they do. The more you try and laboriously piece together all the disconnected stories and details and characters the more you realize that there’s almost nothing salvageable underneath it all; the problems not only don’t have solutions, but they’re baked in on such a fundamental level they can never have solutions without radically altering what Star Wars is. And that’s okay. You can either be cynical, or you can enjoy the movie. But to complain about a lack of originality is to fundamentally miss the point of the franchise. What else could you possibly have been expecting? Star Wars has always been exactly as simplistic, predictable and shallow as it is now. That’s why it’s so good.

And bottom line: The Force Awakens is damn good. Perhaps, on balance, it falls just short of being great, but frankly, good is more than enough after the torrent of pandering mumbo-jumbo we got in the prequels. It’s funny and smart, the action is organic, the cinematography is consistently inventive, the characters are well-drawn and inhabited by likable, competent actors, and the whole thing bounds along with energy and confidence. It’s a hugely enjoyable space-adventure. And thank f**k for that.

Really, though, we should have seen this coming. A droid crash-lands on a desert planet carrying top-secret information; there’s a newly-completed planet-destroying battle station; the new villain wears a black suit and has some kind of thinly-disguised personal connection to the heroes. And Abrams is directing this? How could it have been anything but a competent re-enactment of every iconic Original Trilogy story beat? Abrams has always played well in his own little sandpit; Disney just handed him the toys and made him king for a day, which is the best way to treat a filmmaker who is a fan first, a technician second and an auteur a (very) distant third. 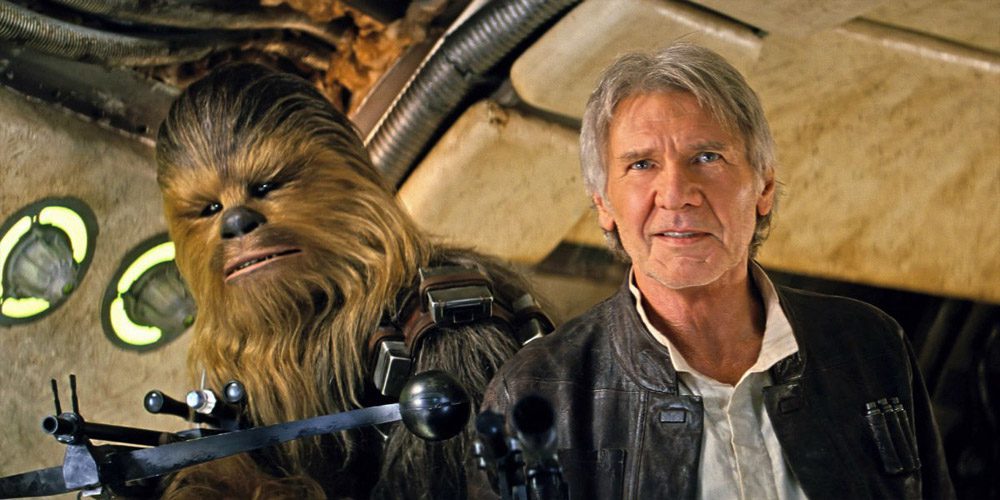 Being a fan is what gave Abrams the confidence to essentially remake A New Hope, but it’s also why he understands how much can be achieved on a dramatic level by just creating characters that are compelling and fun to follow around. Enter the new central trio of Rey (Daisy Ridley), Finn (John Boyega) and Poe Dameron (Oscar Isaacs), the masked-up brooding baddie, Kylo Ren (Adam Driver), and a spherical new droid called BB-8, all of whom are immediately engaging and whose future exploits I’m already looking forward to.

Speaking of which, Daisy Ridley is the kind of forward-looking casting that Abrams has a real knack for, and it’s nice to see a woman at the center of Star Wars after the original trilogy had Carrie Fisher’s Leia play sister, love interest and mother all at once. Rey is easily the most competent character in the film, she never needs saving, and even though she’s nakedly the “chosen one” and given a lot of script-level advantages, it’s very easy to like and root for her. The same goes for Poe Dameron, who’s easily the most uncomplicated good guy the franchise has ever provided, and Finn, the turncoat First Order Stormtrooper, whose fish-out-of-water blundering the movie mines for its biggest laughs. These characters are much more than analogs for Luke, Han, and Leia; on the contrary, they’re probably more interesting and complex than any of them, and Adam Driver’s villain is easily the most intriguing Star Wars has ever had.

In a lot of ways, Kylo Ren is exactly what I always felt George Lucas tried (and failed) to achieve with Anakin Skywalker; morally-conflicted and psychologically-damaged, and frightening largely because he’s not in control – of his emotions or his tenuous position within the First Order. Kylo Ren’s a petulant little bundle of self-loathing, and I’m thrilled that whenever he removes his mask, Adam Driver’s dopey, sodden-eyed, non-threatening face is underneath it.

The Force Awakens is full of performances and character turns and story beats just like this, the kind that lull you into a comfortable sense of familiarity and then do just enough different to surprise or impress you. The movie is mostly content to riff on and rejig elements of the original trilogy, but it does just enough, and in just the right places, that a whole sequel’s worth of ideas gets shaken into the margins. A more thoughtful, less indulgent storyteller can do a lot with those, and what Abrams leaves behind is an iconic set of new heroes that we’re eager to follow into Episode VIII. The Force Awakens isn’t as good as any of the original trilogy, but it’s better than all of the prequels, and really, it does everything it needs to do in order to leave the future of the series looking bright. And that’s much more than I can say for any other Star Wars movie released in my lifetime, which each left the series looking as though it had no future at all.