Hell Fest’s refusal to stray from the tired slasher formula and failure to adequately build suspense keeps a promising premise from being anything more than mildly forgettable Halloween-themed fun.

Hell Fest’s refusal to stray from the tired slasher formula and failure to adequately build suspense keeps a promising premise from being anything more than mildly forgettable Halloween-themed fun.

With October just around the corner, what better way to get ready than with a high-concept slasher set during Halloween. After The Nun proved to not quite scratch that horror itch, I was hoping that Hell Fest might bring horror fans some adequate scares. Despite the bad omens of Hell Fest’s director Gregory Plotkin being behind the lacklustre finale to The Paranormal Activity series and the lack of reviews covering the film, I was still holding out hope that the premise might be able to shake up the notoriously formulaic slasher genre. Unfortunately, the film’s tagline of “It’s fun going in. It’s hell getting out” proves to be prophetic, as this tale succumbs to almost every horror cliché in the book, resulting in a forgettable experience.

Hell Fest quickly introduces us to the typical players one can expect from a slasher film. From the goody two shoes final girl Natalie (Amy Forsythe), the wild exhibitionist Taylor (Bex Taylor-Klaus), and the dependable well-meaning best friend Brooke (Reign Edwards), it’s clear from the start we are navigating familiar territory. Despite being nothing beyond archetypes of the genre, the characters are likeable enough, which is always an asset when we are about to witness tragic events befall these individuals. The trio is on their way to “Hell Fest,” the most intense horror theme park around. Brooke and Taylor inform Natalie that they have plans to meet up with their respective boyfriends Quinn (Christian James) and Asher (Matt Mercurio) and want to set up Natalie with Gavin (Robby Attal) who has snagged the group VIP passes to the event.

The group initially has a blast as everyone is enjoying the multitude of horror-themed attractions while Natalie and Gavin romantically grow closer. This enjoyment is suddenly put to a halt though when a man disguised as one of the costumed ghouls in the park begins to stalk the group. The man avoids suspicion initially as he appears to be a harmless park attendant merely trying to scare the group but, when a girl is murdered before Natalie’s eyes, she begins to suspect that not everything she is witnessing is part of the show. As the group ventures deeper into the park in search of more intense scares where physical contact from park attendants is permitted, they are unaware of the imminent danger from the masked man who seems intent on systematically killing each one of them. 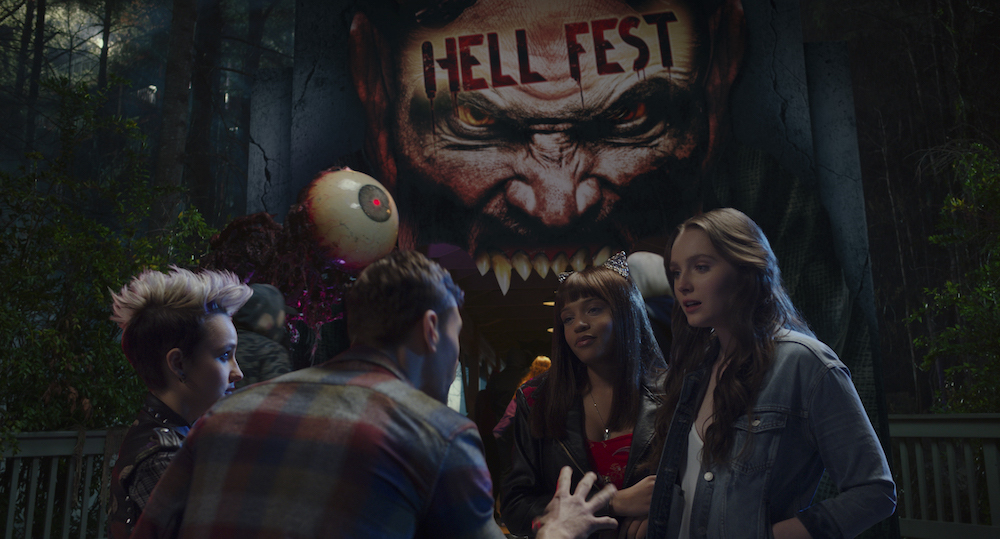 Upon entering the haunted theme park any semblance of a story quickly goes out the window, as instead of getting to know the characters or properly building suspense we are left with a montage of spooky attractions. Many of these scenes don’t even feature the masked man stalking the group, making much of the film feel more like a travelogue promoting an upcoming theme park rather than a horror story. Additionally, the killer’s pursuit of the group is so devoid of suspense or effective setup that his encounters repeatedly come off as though he happened to stumble into them rather than an intentional level of menace. The character deaths are also all remarkably quick and almost efficient, which despite some brutally gory death scenes aren’t particularly satisfying.

Slasher films today are most successful when they are able to break away from the genre conventions even to mild degrees. Hell Fest makes no effort to go in this direction and instead is guilty of almost every pitfall that can plague the subgenre. The contrived scenarios to split up the group are so overly telegraphed that you are able to predict the next victim well in advance of the actual event. The lack of concern exhibited for missing members of the protagonist’s party borders on nonsensical. Additionally, phone service only working when it suits the plot seals the fate of this film falling into the category of a forgettable slasher. All of these factors lead to a predictable story that continually keeps you from being engrossed due to it seeming unrealistic.

The film does have its moments where it shines, such as a memorable sequence with a guillotine that cleverly adds a layer of uncertainty as to what is real and what is part of the attractions. These moments are few and far between though as most of the film is devoted to more conventional attempts at horror. This is disappointing as exploring this angle more fully could have made for a memorable experience.

Despite featuring some creatively gory kills that tie in well with the amusement park setting, as well as one of the more chillingly perverse endings in recent memory, Hell Fest ultimately squanders an innovative premise. Die-hard fans of classic slasher films may derive some enjoyment from its old-school approach, but for anyone wanting something more noteworthy, this horror attraction should be closed for repairs.