Blood Vessel is a horror that continues the wartime horror sub-genre even if it gets torn between being creepy and action-packed.

Blood Vessel is a horror that continues the wartime horror sub-genre even if it gets torn between being creepy and action-packed.


Blood Vessel is a wartime horror from director Justin Dix (Crawlspace) and stars Alyssa Sutherland (Vikings), Robert Taylor (The Meg), Christopher Kirby (Dora and the Lost City of Gold) and Nathan Phillips (Snakes on a Plane).

Blood Vessel starts in the closing days of World War II; a life raft floats across the Atlantic Ocean with survivors from a hospital ship. We have many nationalities represented with the British Jane (Sutherland) and Faraday (Fillingham), the Australian Sinclair (Phillips), Americans Jackson (Kirby) and Bigelow (Ciaco) along with Captain Malone (Taylor), and finally Russian prisoner of war Teplov (Cooke). They have no food or water left, riding on hope more than anything, until a German Minesweeper cruises past them, leading to them hitching a ride. On the ship, they find nothing but dead bodies and soon a young girl seemingly left alone onboard. The mystery about the ship continues for the survivors, who learn that they may well have been safer to remain in the life raft.

The story in Blood Vessel is one that follows in the footsteps of other wartime horrors like Deathwatch, Outpost or Overlord; we will use the backdrop of the horrors of war to add to the desperation of the survivors. By taking the characters that are survivors from all around the war, with even a prisoner needing to work together to take on an unknown enemy that they simply wouldn’t be prepared for, is always great to see. One of the weaknesses in the story comes from the fact we give away a massive hint to everything early on, which does make us understand just what we will be dealing with for the most part of the film. It would be strange to say that this little sub-genre of a ghost ship with people investigating has managed to put itself into a style which is predictable; while they all deal with different subjects and different quality, Virus, Deep Rising and Ghost Ship will be the easiest ones to compare to in terms of how the story unfolds. The tone of the story is also uneven, with it being an eerie start only to race through an action-based second half. 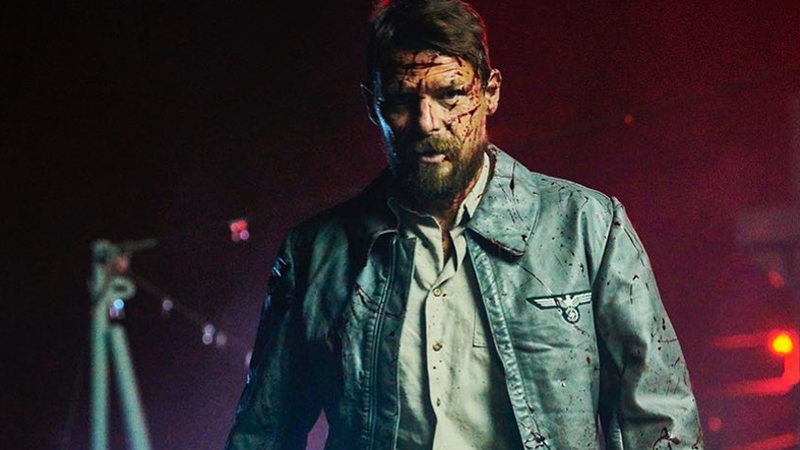 When we focus on the horror side of Blood Vessel, we get an eerie feeling with the atmosphere created by the fog bank covering the ocean that leaves the ship adrift at sea. The opening vessel appearing, along with the first search of the ship, is all built up wonderfully, filling the audience with the tension and fear of the unknown. Where this gets lost is when we start to see what everything onboard is, and it takes away most of the tension, forcing us into a more action-centric horror, which never reaches the levels of the very best in the genre, though it doesn’t fall into the worst. The biggest positive from the film comes from the setting, which is the ship that is drifting aimlessly through the ocean; it adds everything that is needed for the film’s atmosphere. When it comes to acting, we get solid enough performances through the film, though because everything jumps forward in pace we focus more on the action rather than the character development.

Overall this will get the fans of horror interested in seeing what happens next, even if it does change tone throughout, and follow the traditions of the sub-genre of wartime and uses the setting to make the atmosphere eerie.