This recap of Mayans MC Season 2, Episode 7, “Tohil”, contains spoilers. You can check out our thoughts on the previous episode by clicking these words.

Mayans MC continues its newfound fascination with topless EZ (JD Pardo) by opening “Tohil” with him yet again barechested, having been awoken suddenly by a gunshot. It’s all in his head, of course; the bullet that accidentally killed Marlon from City Planning is clearly still rattling around in there. Quick cuts to the scene of the crime being photographed by police, and Emily (Sarah Bolger) frantically texting while Miguel (Danny Pino) and Dita (Ada Maris) suspiciously look on, help to let us know that Mayans MC Season 2, Episode 7 isn’t about to let anyone off the hook for this very easily.

Leticia (Emily Tosta) — remember her? — is still living with Coco (Richard Cabral) in “Tohil”, winding him up by not putting dishes away and spending five grand of her tuition money on helping her friend Gabby’s family cross the border from Mexico. But it turns out a rival biker gang is running a scam, demanding more money than the agreed amount, and holding Gabby’s family in the meantime. Letty happened to mention offhandedly that her dad was a Mayan, but they weren’t dissuaded — on the contrary, that encouraged them to rough her up a little. That, if we know anything about Coco, is unlikely to be forgiven.

Meanwhile in “Tohil”, the police are ready to declare Marlon’s death a suicide. He was in debt up to his eyeballs and Franky (Edwin Hodge), who knew him in school, declares he was kind of an odd nerd. You know what they’re like.

Anyway, Angel (Clayton Cardenas), clearly struggling with Adelita (Carla Baratta) still being in captivity, goes to see Felipe (Edward James Olmos). They have a great conversation about parenthood; Angel asks if, when his mother was pregnant, Felipe ever worried about what kind of father he’d be. He says he still does — it’s a worry that never goes away. Angel confesses he’s going to be a father but is worried he might not ever get the chance to mess it up since the child’s mother is a Los Olvidados rebel. Felipe, in turn, confesses that Adelita came to kill him because of his past, much of which he has kept hidden from his children. Olmos is fantastic as ever, but Cardenas’s watery-eyed desperation is what really sells this scene. It’s one of the lower-key highlights of the entire second season so far. 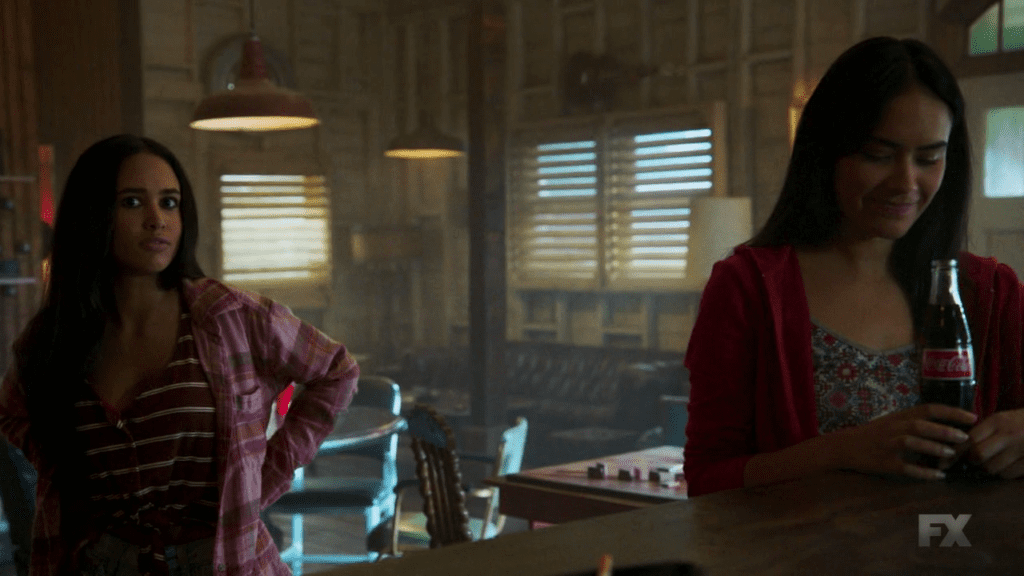 Coco presents Gabby’s case to the club, who naturally have some issues with how a rival gang has encroached on their turf without the usual how-do-you-dos. Gabby meets EZ and clearly takes something of a shine to him, perhaps because of how capably he can recite the poetry she has tattooed on her forearm — another reminder of EZ’s plot-convenient eidetic memory — or perhaps because he’s super jacked. Either way, Taza (Raoul Max Trujillo) provides some brief but helpful backstory on our new antagonists, whom the Mayans decide to do nothing else but harass until the matter is resolved.

The harassment begins with some pretty basic detective work — following up on some hearsay and interrogating local eateries for the addresses where they’ve delivered large orders recently. Running a stash house is hungry work. This leads the Mayans directly to the house where the gang is keeping plenty of illegals — but not Gabby’s mother or little brother, which the MC discover after a brief shootout. One of the captive women reveals that those who can’t pay are taken to “the cages”; the young are trafficked, the rest are “put down”. The woman doesn’t know where the cages are, but one of the men does — once Coco executes one of his former captors, he’s quite happy to share the location.

Emily, who has learned about Marlon’s death on the news and still hasn’t heard anything from EZ, is called, alongside Miguel, to see Mayor Antonia Pena (Alexandra Barreto), who reveals that Marlon sent out several emails revealing that he had been taking bribes in exchange for insider information. As such, the Chinese Agra Park bid has been thrown out. Victory for Emily, then, though Pena makes no secret of how shady the whole affair is, and neither does Miguel. When they separate, he asks Nestor (Gino Vento) to keep an eye on where she goes — 24/7.

The Mayans raid the cages — a sorry sight; human beings fighting over slices of bread and cups of water — in a bloody shootout. Gabriella’s mother (Carmen Rojas) and little brother are among those rescued. The Mayans are declared good people and heroes for this, both by Gabby and her family and among themselves; they clearly feel they’ve done something worthwhile, which I suppose they have, even if it wasn’t exactly in a diplomatic fashion. Gabby still clearly has the hots for EZ — or is it something more? — but he finally takes a call from Emily, and meets her secretly to explain what happened with Marlon. He sent the emails and made his death look like a suicide. Emily clearly isn’t keen on the idea of death on her conscience, but as EZ explains to her, their version of the truth is all they have. Their version protects her. In exchange, she offers to help EZ and his family in whatever way she can. He presents her with the documents given to him by Happy (David Labrava) last week. As he tells her, it’s a family thing.