How does Space Force season 1, episode 1, “THE LAUNCH” begin?

Space Force season 1, episode 1, “THE LAUNCH” is a frantic episode but that’s to be expected given the subject matter and its own satire on the current US government. It opens up with Mark Naird being made a 4-star general; he is clearly proud and he’s told to wrap his speech. There’s not much of a crowd because the administration is a little chaotic. The POTUS wants to make some changes and he’ll be tweeting about it soon. Mark has a problem with Kick in the room — POTUS wants boots on the moon by 2024, SPACE FORCE, with Mark leading the operation. Mark initially laughs at the concept. and then realizes he is in charge.

Does Mark hate the idea?

Mark admits to his wife Maggie that he was disappointed at first but then he thought “the founder of Space Force is going to me”. He reveals that they are going to Colorado to an old facility — his wife cries. It then skips to a year later. A store supervisor references Mark’s “secret” base so he puts him in his trunk and asks his men to imprison him until launch. It’s launch day. Dr. Mallory speaks to Mark and he tells him to postpone the launch as there is too much moisture in the air. Russian official Yuri then visits Mark — he wants to see the fuel pump; Mark says he has no reason to see it and then Yuri mentions texting him on a “secure phone” which frustrates him. Mark then watches a test launch that fails.

Space Force season 1, episode 1, “THE LAUNCH” shows how Mark has bought into the whole concept. Mark presents Space Force to some students about getting boots on the moon and states they will be US boots — he’s encouraging more students to join Space Force. His daughter Erin wants money so she can go to a desert concert with Yuri and Mark is fuming that the Russian has managed to court his daughter. Erin says he will go to the concert with Yuri anyway and be totally dependant on him. Mark says he will talk it over with her mother. Mark visits his wife Maggie in prison. He tells her he misses her very much. Maggie states that if he needs companionship while she’s in prison it’s fine. She also gives the green light for Erin to go to the concert. Something is telling me that Maggie has met a new woman in prison. 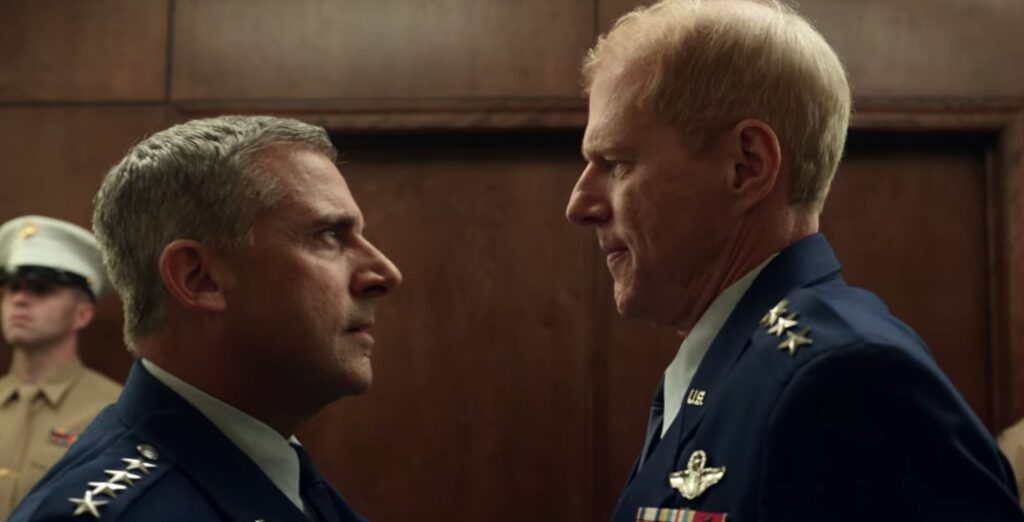 Is the launch happening?

Mark tells delegates over lunch that the launch will be happening at 1700 hours and they are ready. His father rings him and says his wife has run off. Mark uses a satellite to find his mother. Mallory tells Mark that he’s canceled the launch as it’s too expensive to fail. He takes Mark to the launch site and demonstrates that humidity is a problem. He asks the Asian-American scientist where he’s “originally” from when he says Ohio and Mallory suggests that Mark is being racist. None of the scientists votes in favor of launch but Mark doesn’t delay it.

How does Space Force season 1, episode 1, “THE LAUNCH” end?

Mark enters his office panting with the pressure of the launch and having a mini panic attack — he starts singing to “Kokomo” by The Beach Boys to calm himself down and starts dancing in his office. When he leaves the office he stops the congresspeople and states that the launch is on. Mark announces Epsilon 6 as one step closer to the moon and highlights possible setbacks and risks. The launch begins but the feed cuts out. The good news is that Epsilon 6 is in orbit. Later in the evening, Mallory tells Mark he was right to do the launch which is confusing as he knows nothing about sense. They look into the sky to look at Epsilon — they see another satellite dismantle it and Mark is fuming.