How does Space Force season 1, episode 2, “SAVE EPSILON 6” begin?

Space Force season 1, episode 2, “SAVE EPSILON 6” is a hilarious follow-up to the pilot with Mark showing just how out of depth he is. It begins with Mark showing Mallory their satellite getting dismantled by China and wants to return to the base immediately — they drive back late into the night. Erin returns home with Yuri and tells him that he can’t come inside as her father is helping her with homework. When they get to the base, they have 10 hours to reattach the panels. The scientists all discuss attempts to re-attach. Mark has a problem with the Belgian scientist. They all brainstorm and Mark has no idea what he’s talking about.

Someone suggests a bomb; Mark confesses that it was his idea to use a bomb. They explain to him that space is a vacuum. Mallory asks Mark why he does not trust scientists — “You say you can’t eat carbs one day, and not to eat them the next”. They then go off course and show some of the chimpanzees they have in space. Mark asks if they could train the astronaut dog in space to help reassemble the panels despite Yamato explaining they have a viable solution. He then asks about the chimpanzee called Marcus — they video link to the animal. Mark suggests telling Marcus a lie in order to get him to do what they want. The General and the trainer continue to communicate with the chimpanzee. Mark and the trainer manage to get the chimpanzee to put on a helmet. 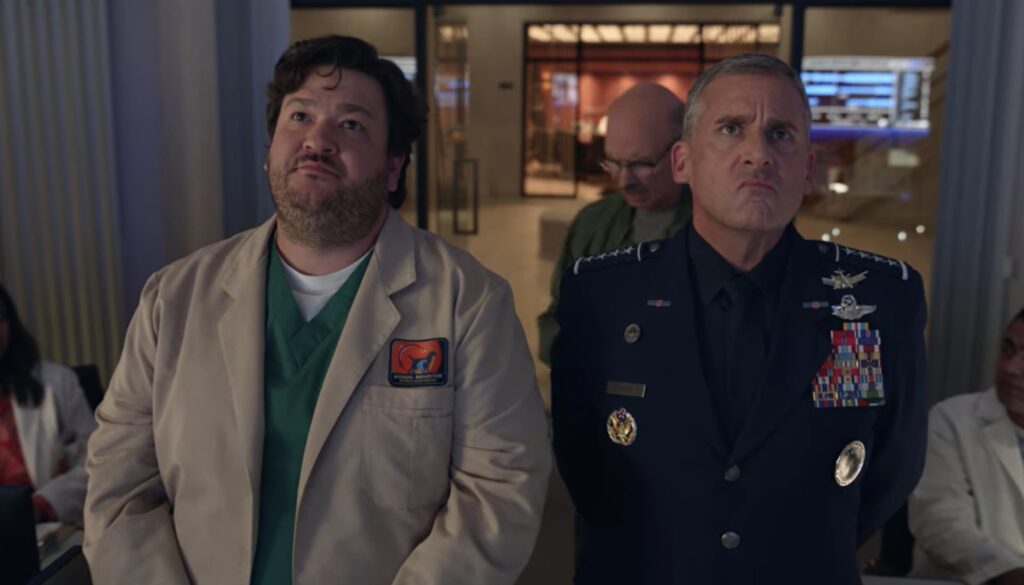 Eventually, Mark and the trainer get the chimpanzee to pick up the laser gun. Mallory is excited that they got the chimpanzee out of the capsule. Marcus starts getting frustrated with the instructions. Eventually, the chimpanzee starts drilling into the panels but he starts spinning and let’s go of the drill and is on the trajectory towards the sun. Mark wants to award a medal to the chimpanzee and bring him home. Mark thanks Marcus for his service as he spins off.

The reason why this scene is funny in Space Force season 1, episode 2, “SAVE EPSILON 6” is that it convinces the audience that Mark may pull the plan off to use a chimpanzee to fix satellite panels.

What about the dog

Mark wants to now try the dog Theodore but he’s been eaten by the chimpanzee Marcus. Mark then brings up Yamato’s idea but Mallory says that idea won’t work now because the Chimpanzee ruined it by putting the satellite off-course. The Chinese space station collects Marcus despite Mark telling him not to go to the enemy. Mark gets a call from the government and he tells them he will hand in his resignation for his failures but they just tell him to get some rest. He returns home and sees his daughter asleep at the table with her homework. He sits with her to figure it out.