This recap of Netflix series Space Force season 1, episode 9, “IT’S GOOD TO BE BACK ON THE MOON” contains significant spoilers.

How does Space Force season 1, episode 9, “IT’S GOOD TO BE BACK ON THE MOON” open?

It begins with Mark providing a speech about his team that will be going to the moon in 8 hours. Journalists point out that some of the team are not astronauts and they are launching four years ahead of schedule, risking lives. Mallory is freaking out and freaks Mark out. Space Force season 1, episode 9 is all about risk and Mark battling with his newfound “open marriage” life. The launch begins and a few of the team start freaking out. Mark initiates the launch anyway. They exit Earth’s orbit and hit trajectory towards the moon. The team on the ground celebrate.

Mark approaches Kelly and asks her if she’d like to go for dinner together as a date. He tells her he is both married and available and mostly looking for companionship; it’s a very awkward conversation with Mark explaining that he still loves his wife — she suggests that they shouldn’t talk about his wife. Space Force season 1, episode 9 sees Mark still struggling with breaking traditions.

Mark gets a call about the Chinese — they have claimed an area of the moon for scientific purposes. Mallory speaks to one of the Chinese scientists to try broker a deal; the Chinese scientist, Dr. Zhang, says they are the first to live on the moon making the conversation awkward. He tries to explain to Dr. Zhang that a country cannot claim an area of the moon. Mallory is taking the science war personally. The day gets worse as in the news it is revealed that one of their astronauts is a criminal — Mark is furious at Tony for not vetting the crew.

Mark and Kelly go on their dinner date. She asks Mark if he’s allowed to date her — when he says yes she wonders why they traveled so far for dinner. He mentions that he doesn’t want his daughter to know before telling her. The next morning, Mark asks Erin about how’d she feel if he started dating someone. Erin is against the idea because he’s married and begs him to not date someone. Kelly then comes into the kitchen and Erin is upset. 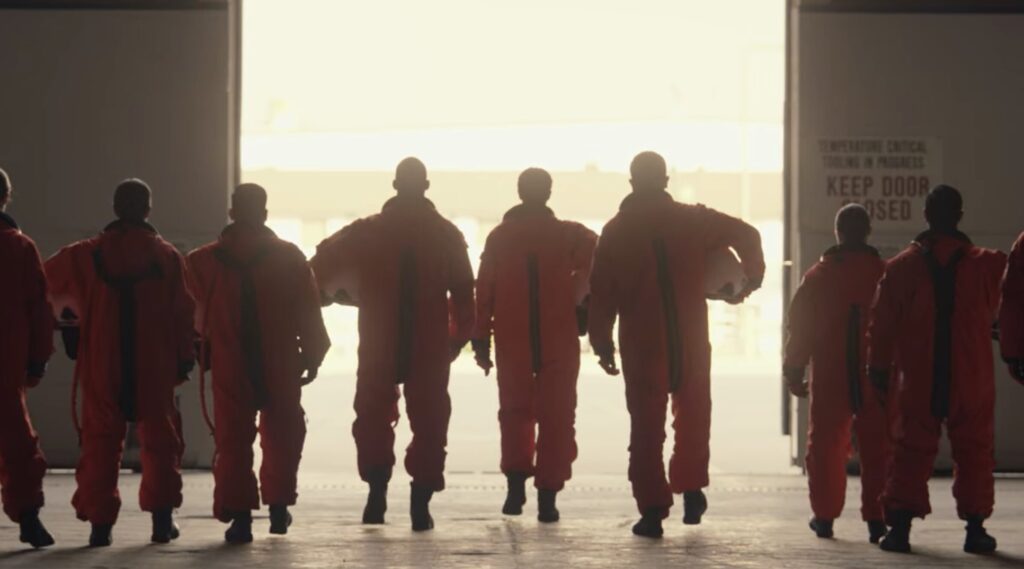 What shall I say on the moon?

Angela video calls Chan from the spaceship and asks for advice on what to say when they land on the moon — she wants a good sentence. She suggests, “It’s good to be back on the moon”. Meanwhile, Mallory tells Mark that they are being bullied and wants them to stand up for themselves and make a provocative move on China. Mallory is completely out of character and wants to be the aggressor for once.

Erin meets her mother Maggie in prison. She tells Maggie about her father “cheating” on her. Maggie tells Erin it was her idea and that she’s seeing someone as well, one of the female guards — Erin walks off.

Mark video calls the Chinese General — the General asks them to stay away from their base but in a respectful way. Mallory and Chan then learn that the Chinese have found some unlimited nuclear energy which is why the Chinese are protecting that area of the moon — they have a drilling station. Mallory tells Mark to grow some balls and do something about this. Erin then speaks to Mark outside of the control room and states if he and her mother go separate ways then she will be on her own. He tells her she will always be on the front of the line. She times the conversation as forty seconds before walking off. Space Force season 1, episode 9 sees Mark continue to have personal problems.

Mark orders his team to land in the same area of the moon as Chinese to show the US strength — they land successfully. Mark tells Captain Ali to stretch her legs and go for a walk. Angela walks on the moon and says “it’s good to be black on the moon” — she realizes she completely said her sentence wrong and there is awkwardness in the control room. The rest of the astronauts dance on the moon. On the live feed, the Chinese crew runs over the USA flag. Space Force season 1, episode 9 shows the progress of the space team but that Mark’s personal problems remain.